Bethard is a well-known sportsbook and casino operator. The company has gained a lot of visibility in 2018 after signing a marketing deal with Zlatan Ibrahimovic. They are best known in Scandinavia where Bethard Group owns few casinos as well targeted for Finnish and Swedish users. Bethard has recently joined the Scout Gaming Group fantasy network making it one of the best European daily fantasy platforms. This article is a Bethard review for daily fantasy players.

Bethard was founded at 2014

Bethard is a relatively young operator in the gaming industry. The company was founded at 2014 and operated first with a Curacao license. Bethard started to grow in 2016 when they received a Malta license. Bethard Group kept getting bigger in 2017 and acquired several Scandinavian casinos. They are also one of the licensed sports betting operators in Denmark.

Bethard signed Zlatan Ibrahimovic as the new brand ambassador in 2018. This move has raised Bethard’s brand awareness a lot.

Bethard is a traditional sportsbook & casino platform, but nowadays they are also one of the European daily fantasy providers. If you aren’t familiar with daily fantasy as a concept, check our guide first: what is daily fantasy football?

In short, daily fantasy means playing fantasy football for real cash. The concept is a bit similar to online poker, where you play against other users – not the house. The platform provider takes a 10% rake of the stakes, that’s all.

Note: There’s also Virtual Sports in the top menu of Bethard. These are just computer-generated events, which have nothing to do with fantasy sports.

There are no monthly fees at Bethard and the registration is also free.

After landing to the site, just click the green CREATE ACCOUNT button on the top corner. Fill in your details and you’ll receive an e-mail after a succesful registration. Click the confirmation link in the mail and your account is created.

Daily fantasy tournaments work like online poker tournaments. Each competition has a buy-in and a prize pool related to that. Higher buy-in means usually a bigger prize pool. 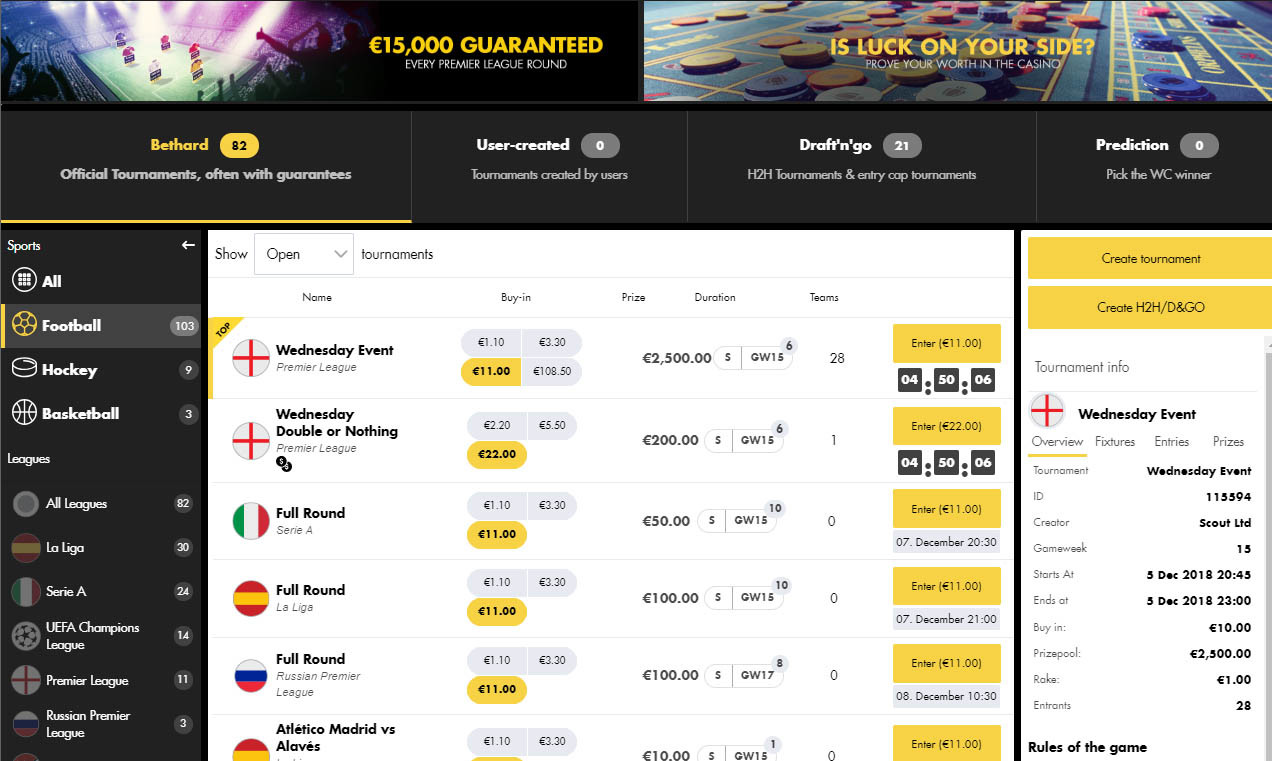 The biggest tournaments have guaranteed prize pools. This means that the game provider pays out a fixed sum of prizes even if there was just one participant.

The tournament selection can be filtered by a sport and a league, which you can select from the left sidebar. You can also filter tournaments by clicking the four big tabs above the tournament list.

Bethard is part of the Scout Gaming Group network. This means they have a lot of same tournaments with Fanteam. There are some special events that are only available at Bethard (or at Fanteam), though.

If you want to play for real money, you need to fund your account first. Click the big green DEPOSIT button from the top right corner to proceed.

Bethard supports the usual deposit methods. Usually, eWallets provide the smartest and fastest way to move money in and out. You can use the popular eWallet Skrill for example. 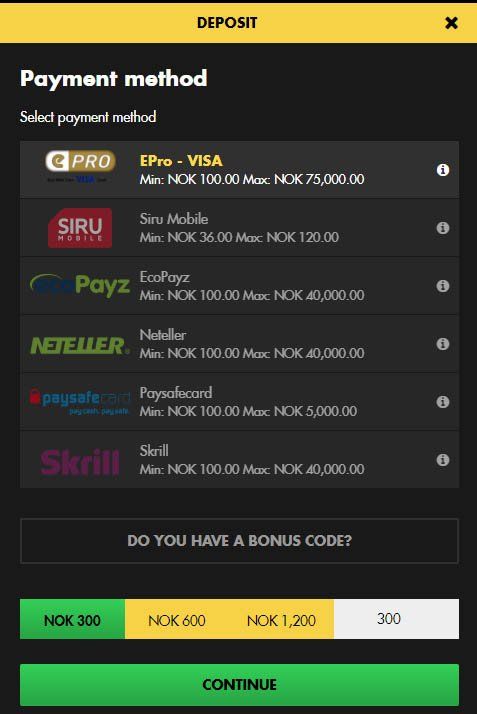 The system gives you multiple options before making your first deposit. You can claim a sportsbook bonus, casino bonus or no bonus at all. Each bonus has its own rules and turnover requirements. You’d check them carefully before selecting any of the bonuses. There’s one thing you’d note: the sportsbook bonus and casino bonus cannot be used for fantasy sports.

I advise you to check the current status from the Bethard support chat before claiming your welcome bonus, since terms and conditions might have changed after this article is published. There might be also special fantasy sports bonuses available in the fture.

You must go through a standard KYC procedure before withdrawing your money.

Once you have made a deposit to your Bethard account, it’s possible to play for real cash. Click FANTASY SPORTS from the main menu to view the tournament lobby. Filter the tournament list to find the event you want to participate in.

Click the grey buttons in the Buy-in column to select the desired buy-in amount. After that, click the yellow Enter button. 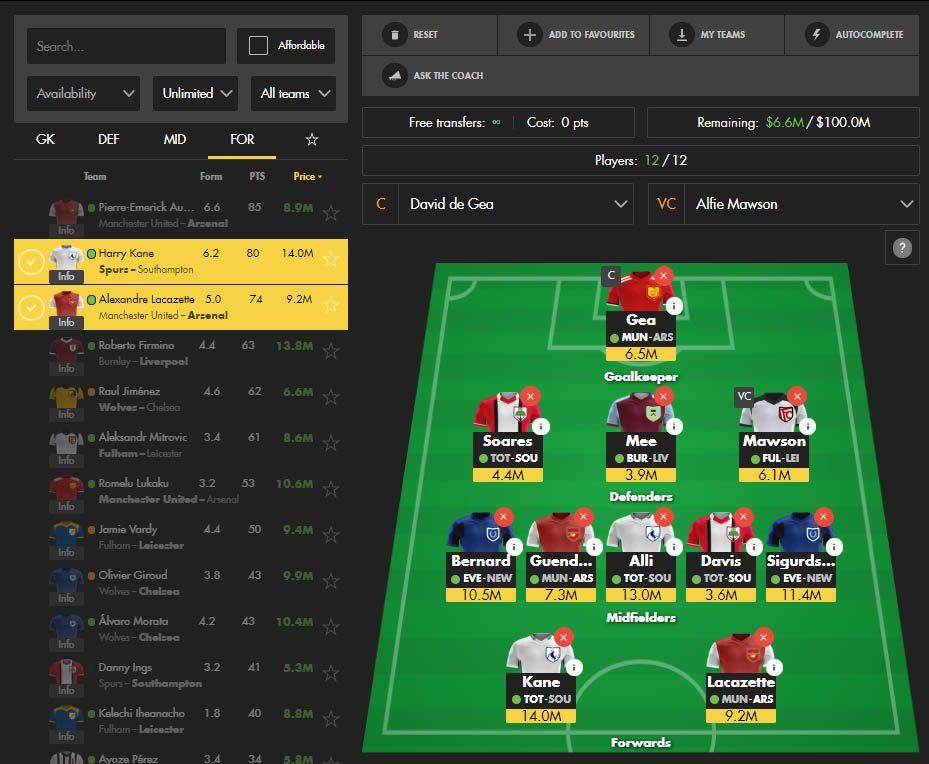 Bethard is using the same game engine as Fanteam, so this view might be familiar to you already. Bethard’s version has just different colours in it.

Creating a team is no different from any other fantasy game you might have played. There’s a list of players on the left, which you can filter by position, team and player price. You can also search for an individual player.

Each tournament has a budget limiting your options. Typically, it’s 100 million, just like in the official Fantasy Premier League game. Just one substitute player is selected for daily fantasy tournaments.

Fantasy tournaments begin one minute before the first match kicks off. This means you can often wait for the official starting line-ups, which are published one hour before each match.

In a normal tournament, you must select a captain and vice-captain for your team. Captain gets double points (just like in FPL), and vice-captain is used if captain doesn’t play for some reason.

Remember to confirm your participation by clicking the ENTER TOURNAMENT button.

If you want newbie tips for player selection, check out the following articles. They are written for the official Fantasy Premier League game, but you can use the information at Bethard as well.

Bethard’s fantasy engine is using the same player prices as the whole Scout Gaming Group network. The prices are dynamic, which means they change each gameweek based on fixtures. Harry Kane might cost 20M at home against Cardiff, but only 7M at away to Manchester City.

Dynamic pricing makes daily fantasy more realistic, but it might feel a bit more difficult in the beginning. It gives more options to fantasy managers, because you cannot build a team around certain underpriced key players everyone else does.

There are also other sports available at Bethard. Currently there are fantasy tournaments to ice-hockey and basketball as well. In ice-hockey there’s NHL, KHL, Finnish hockey Liiga and the Czech national league available. Basketball includes NBA. 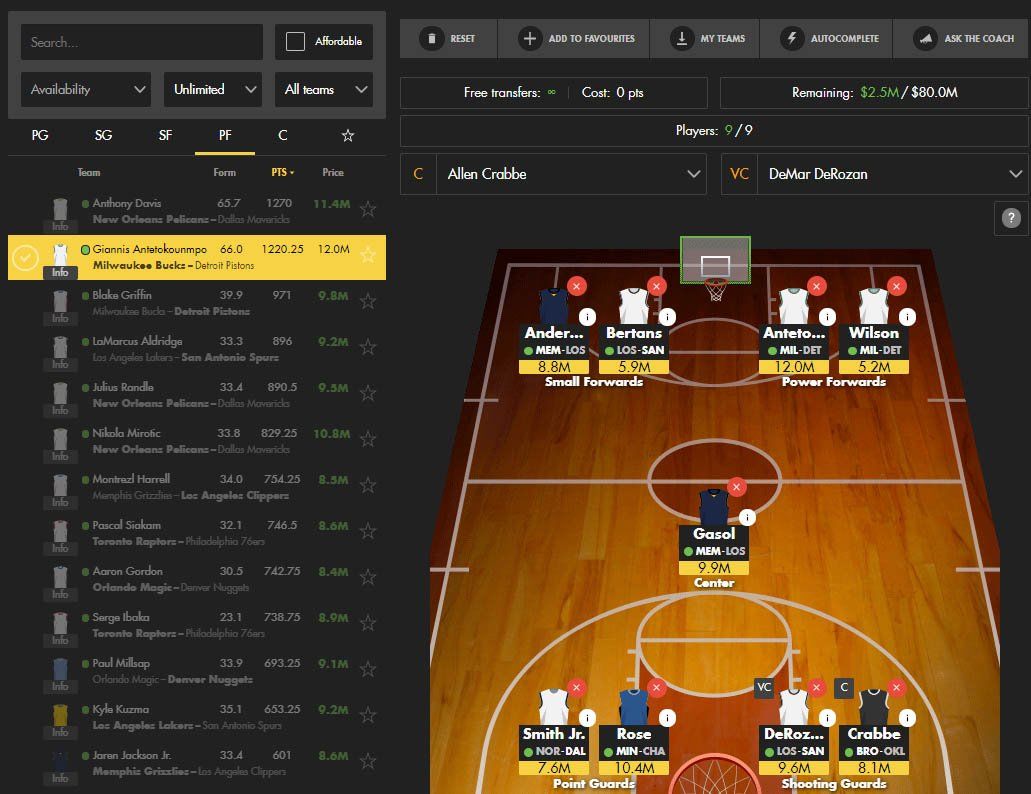 Playing daily fantasy hockey or basketball is very easy, since the graphical interface works the same way in each sport. Above is a picture of an NBA team creation page. There are two major differences to football:

Same goes for ice-hockey. There are specific rules and formations you must choose for each sport.

Bethard is also using the Scout Gaming Group live score engine. You can follow your team’s development in real-time and check any match from the Live results page.

Bethard is using the same scoring system as all other Scout Gaming Group sites (such as Fanteam). In football, it’s very close to the official Fantasy Premier League game. This is a big advantage, since it’s easy for any FPL (or UEFA Fantasy) user to adapt into Bethard rules.

There are couple of differences to FPL rules:

These adjustments make central/defensive midfielders slightly more valuable, who play in top teams but aren’t getting any assists or goals.

Bethard has also a game type called Flexi Five. It is used mostly in single-game tournaments, where the player pool is small.

In Flexi Five you pick just 5 players almost without any formation limitations: you can pick 5 defenders or 5 midfielders but only 3 forwards. The scoring rules are normal in such tournaments.

Ice-hockey and basketball have their own rule sets, which you can find from the Support page.

Bethard has been around for several years and the company is growing steadily. The co-operation with Zlatan has also increased the brand visibility especially in Scandinavia.

Bethard is first and foremost a sportsbook & casino operator. This is a big difference to its major competitors in the daily fantasy industry. If you like to bet on sports or play in the casino and enjoy daily fantasy, you find everything under the same roof.

The daily fantasy product is provided by Scout Gaming Group, which is the leading fantasy provider in Europe. Scout’s platform won recently the “Best DFS product” prize in SBC Awards 2018. It offers a good gaming experience, and Bethard’s version is just a re-branding with different colours and special tournaments.

The scoring system makes it very easy for any FPL enthusiast to start playing at Bethard.

If you want to turn your fantasy knowledge into real money, Bethard is a good platform for that!

Many fantasy managers like the fact that Bethard is a sportsbook & casino as well. This way you can place your bets and fantasy tournament buy-ins from the same bankroll. If you just need daily fantasy and don’t want to have sportsbook and casino distractions, you can try Fanteam instead.

The only real difference between these two are the colours. There are also some special tournaments held only at Bethard and Fanteam.

In practice, all major tournaments are coming from the Scout Gaming Group network. This means they are identical at Bethard and Fanteam. You can join them from either site and it makes no difference. The benefit of being part of a network comes from big prize pools. There’s a 15.000€ prize pool tournament every week in Premier League and a 100.000€ season game.

Bethard is a good option for serious fantasy players. The down side is that the major tournaments are quite difficult for newbies to win. If you want to play fantasy with small stakes for fun, you’ll have better winning chances at one of the alternative sites. But prizes are also much smaller.

If you want to play other sports, such as Formula 1 or MLB or biathlon, you find those at Zweeler. Bethard has the best ice-hockey tournaments and their NBA prize pools are also very nice. All in all, Bethard is probably the best option for football fans.

As mentioned earlier, Bethard has dynamic player prices. This feature is something you either like or don’t like. Tournaments are more realistic, but some managers might think that traditional fantasy elements are missing.

Bethard is one of the best daily fantasy platforms in the market. Sportsbook and casino will give you something extra on top of the fantasy excitement!

This is a Sportito review. Sportito is a rather new platform in the daily fantasy sports business. They’ve taken a different approach to fantasy football by offering tournaments tailored based on user’s fantasy football experience. […]

Fancy yourself as the next Jürgen Klopp, Josep Guardiola or José Mourinho? Can you pick the perfect twenty players to make a squad for Saturday 15 September 2018 at 13:30 hours CET and compete for […]

Fanteam has become the leading daily fantasy site in Europe. It’s nowadays part of the Scout Gaming Group network, which is growing fast every year. This is a Fanteam review. We’ll guide you through the […]