Daily Fantasy Sports (DFS) is the next step for fantasy football enthusiasts. We’ve seen DFS grow tremendously in the United States during the past decade. It has also landed in Europe in the previous five years, and prize pools are growing steadily. What is DFS all about? This article is a daily fantasy football guide.

Daily Fantasy Sports has been around since the 1990s. It started to gain significant popularity in the United States since the year 2005. The American market has been dominated by two giants, Fanduel and DraftKings, which have grown to billion-dollar businesses.

Daily Fantasy Sports (DFS) is a broad term for all daily fantasy games. In the USA, the biggest games have been traditionally about American football (NFL). Other sports like basketball, baseball, ice hockey, and soccer are nowadays included.

There are two major differences between DFS and Fantasy Premier League:

FPL is a season-long game, which requires a 9-month commitment from players. DFS is a format, where each tournament lasts typically one game week. This can be one day or one weekend. There are also DFS tournaments of single matches.

The idea is very similar to poker. Each tournament has a buy-in and a prize pool, which gets higher with larger buy-ins. Typical buy-in could be 5-10$ and the prize pool could be anything from 10.000 to 1 million dollars.

There are also freerolls, just like in poker. They are usually organized for marketing purposes. You can participate for free and win cash prizes.

DFS is no more just an American thing. It started to land in Europe in the early 2010s. Operators such as FanTeam offer a wide range of football leagues, ice-hockey, basketball, and even golf.

How to Play Daily Fantasy Football

Playing daily fantasy football is like mixing FPL with poker. In our example, we’ll look at FanTeam.com, which is the leading European DFS operator.

The major difference is the tournament lobby (see the picture below). 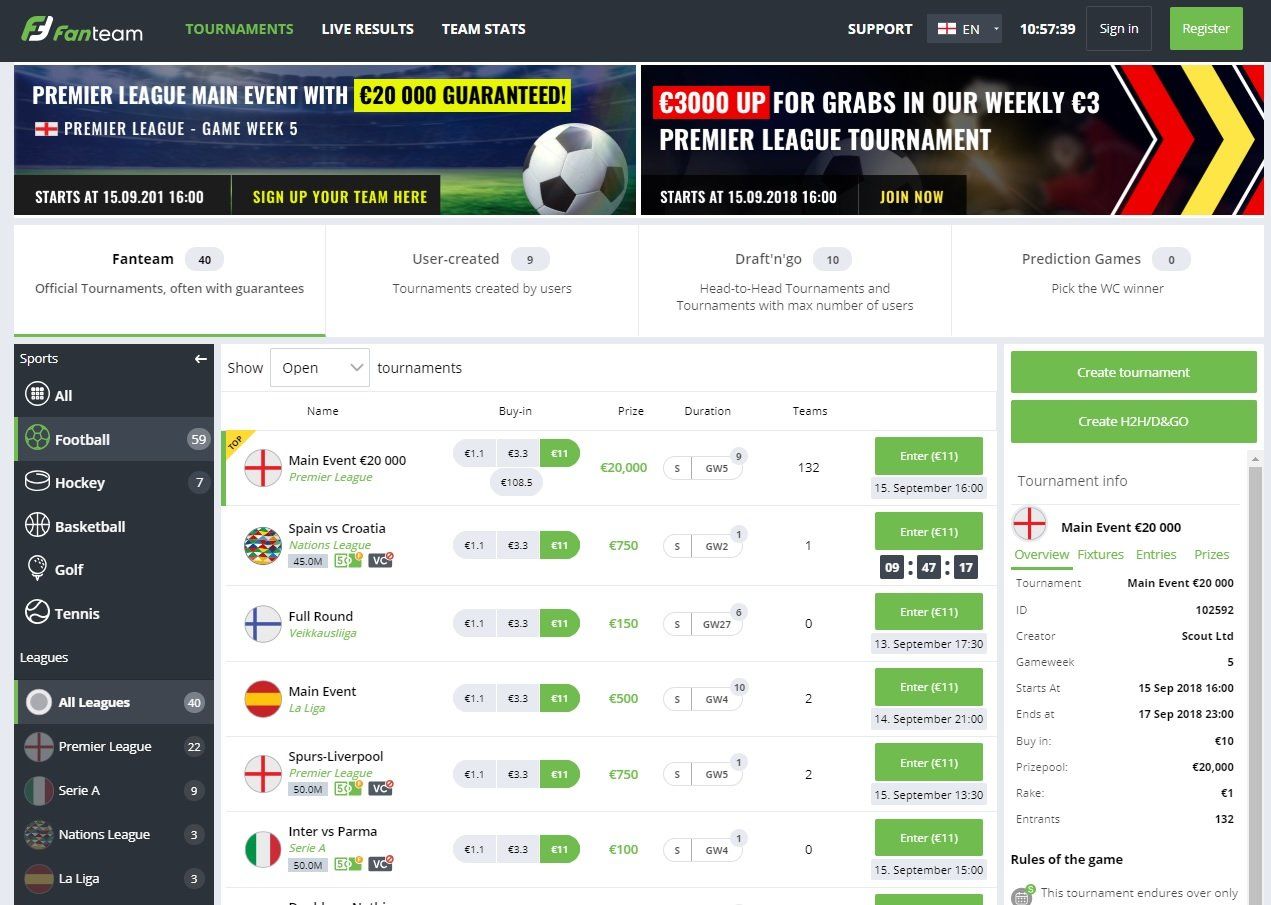 In FPL, you are always playing just one season game. In daily fantasy, you can play an unlimited amount of games. There are often more than 100 different tournaments available every week. Even more, when we count in other sports like basketball and ice hockey as well.

There are usually several different buy-in levels available to each tournament. One euro is the minimum buy-in, while the maximum buy-in can be hundreds of euros.

Since daily fantasy is all about money, you need to make a deposit first. Go to your account to find the cashier. The usual deposit methods available, such as Skrill, VISA/Mastercard, Neteller, and PayPal.

After funding the account, you can enter tournaments from the lobby. The team selection is very similar to FPL. The major difference is that there won’t be any need for player transfers, because the tournament lasts just one round (or one match). 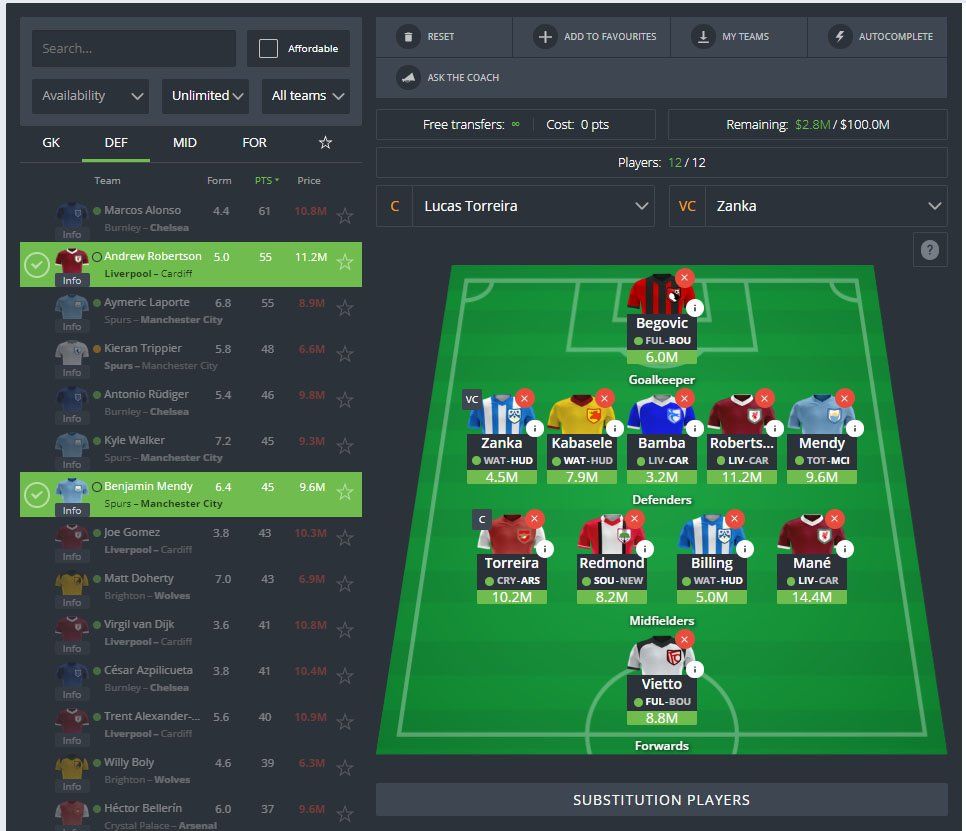 There’s just one substitution player in a typical Premier League tournament. This is because the tournament deadline is set to one minute before the first match. It allows you to check the actual starting line-ups and select players you know are starting the match. Hence, there’s often no need for a substitution at all.

The scoring system at FanTeam is very similar to FPL. You can check the exact rules from here. You can also follow the tournament progress the same way as in FPL. Scores are updated as events are taking place, and you can follow your tournament position to move in real-time.

Tournament prizes are typically paid out around 15-30 mins after the matches are finished. After that, you are free to cash out your winnings. You need to go through the standard KYC process before the first withdrawal.

Let’s look at the differences between FPL and DFS. Why would a Fantasy Premier League guru want to play daily fantasy as well?

Use Your Existing Knowledge

One of the best things in daily fantasy football guide is the fact that you can re-use the existing FPL knowledge. If you are a hardcore FPL manager and study players, stats and highlights for several hours, the hard work is done already. After building your Fantasy Premier League squad, you can use this same information in daily fantasy.

The scoring rules can vary from FPL, but the basic principles are pretty much the same. Defenders get points from clean sheets and attackers must score goals. You might even be able to build the same team for a DFS tournament.

Win Money with Your Knowledge

Fantasy Premier League is a great game because it’s free. For many people,e it’s an alternative to betting because matches become more exciting without money being involved.

However, there are thousands of (skilled) players, who’d love to get paid as well. Some people make bets against their friends of the upcoming FPL round or the whole season. But if you want to win serious money or even turn a fantasy football guide into an income, daily tournaments are the way to go.

There are Freerolls Available

As explained earlier, daily fantasy is quite similar to poker. You have a tournament lobby with buy-ins and prize pools. There are also freerolls, which you might have already seen in the poker world.

The idea is quite simple: the operator is arranging a tournament, which has no buy-in. You can participate for free and win cash. These tournaments are obviously quite popular, but there’s no harm in trying. Freerolls are also a good way to get to know the game without any risk.

You can Only Participate When You have the Edge

The problem with FPL is that you must participate in every single round. It’s a 9-month long marathon, which you can’t just put on hold if it starts to go wrong. Daily fantasy football starts from zero every week. Each tournament is an individual event, which has no connection to the previous ones.

This makes it possible for you to look for tournaments, where you feel you have an edge. The player prizes are always set by the operator. Most of the time they are accurate, but prices are never 100 percent perfect. You can check the tournament terms, prizes pools, player prices, etc. and participate only when you feel your chances are better than average.

There are Other Sports and Leagues as Well

There are many football fans, who follow also UEFA Champions League, Serie A, La Liga, and various other leagues. Maybe you like NBA or ice-hockey as well?

Daily fantasy football Guide makes it possible to play fantasy also in these leagues and sports. Nowadays there’s even cycling and golf available! For example, Tour de France has become a very popular fantasy game recently. The basic idea remains the same: you pick athletes to your team, who score points based on their actual performances.

Daily Fantasy is a Money-Making Opportunity

Daily fantasy football guide has been around in Europe for some time, but it’s still a new thing. There are lots of people, who don’t even know how Fantasy Premier League works. And very few FPL players are familiar with daily fantasy.

There is constantly overlay in the biggest daily fantasy tournaments. This means, that the game organizer guarantees a too big a prize pool. For example, if the prize pool is 10.000$ and the buy-in is 10$, there are often only 600-700 participants. This means that the game operator is handing out free money to the pot because buy-ins only cover 6000-7000$ of it.

There are also deposit bonuses available, which won’t be there in five years. The chances for money-making are now much higher right now. You can think about the early days of the online poker boom.

Daily fantasy has become so popular in the United States, that there are people living solely from fantasy sports. They build complex algorithms to price up the players and spend a lot of money on tournament participation. Professionals can make dozens of teams to a single tournament to enhance their probabilities of winning.

Fantasy Premier League is always a hobby. Daily fantasy can become a profession. Even if you wouldn’t make your entire living out of it, there’s a chance to make some nice additional income.

The Future of Daily Fantasy Football

Daily fantasy has been around in Europe for several years, but it hasn’t exploded in popularity. Several big operators have gone out of business as well. The most surprising thing has been the lack of movement from FPL players to daily fantasy.

It seems that the large majority of FPL players don’t actually want to place money on the table. People rather enjoy a stress-free game and tend to spend their weekly gambling budget to casinos or sports betting.

There’s one group of people, who have found the daily fantasy: sports bettors. Especially the professional ones, who can make their own player prices and match estimations. If they can beat the tough Premier League betting market, they can usually make some extra money from daily fantasy as well.

Even if daily fantasy hasn’t exploded yet, it’s taking steps forward. Scout Gaming Group has become the leading European operator in the past few years. Scout has already made deals with Betsson Group, ComeOn, Bethard, and many other bookmakers. These deals will bring daily fantasy games to a much larger audience.

It looks like DFS and the traditional sports betting are going to merge in the future. Some bookmakers are already offering H2H bets between two Premier League players, where the winner is decided by fantasy points.

There are also big changes in the United States. The major reason for the rise of the DFS was the online gambling ban. Now, these restrictions are being removed and people will be able to bet more freely. Is that going to remove money out of a daily fantasy or bring even more money in? Time will tell.

Fancy yourself as the next Jürgen Klopp, Josep Guardiola or José Mourinho? Can you pick the perfect twenty players to make a squad for Saturday 15 September 2018 at 13:30 hours CET and compete for […]

This article is the next chapter to the beginner’s guide of How to play Fantasy Premier League. The purpose is to give Fantasy premier league strategy tips for players, who are already familiar with the basic […]

This is a Sportito review. Sportito is a rather new platform in the daily fantasy sports business. They’ve taken a different approach to fantasy football by offering tournaments tailored based on user’s fantasy football experience. […]