Fantasybet is one of the most popular European daily fantasy platforms. It’s a great choice for daily football enthusiasts, who want to play fantasy football for money. This article is a Fantasybet review. We’ll introduce the Fantasybet platform and go through the most important features.

Fantasybet was founded by nine childhood friends from Northern Norway, who all shared a passion for fantasy and betting. They noticed there was something missing from the market linking fantasy football and betting together. This vision turned into reality with Fantasybet.

Fantasy football operations started at 2014. Back then, Fantasybet was one of the first European DFS providers. Fantasybet co-operates with Viral Technology, which is known in the gaming industry for owning several online platforms. The most popular one is Lucky casino. Fantasybet has UK Gaming Comission and Curacao licenses through Viral.

In short, it means playing fantasy football for real cash. The word daily refers to the length of tournaments, which can be anything from one weekend to one single match. You are always playing against other users, not the house.

There are no monthly fees and the registration is free of charge as well. There are also weekly freerolls available, which means you can get a starting bankroll for free!

Once you enter the front page, click the sign-up button and fill in the necessary information. You’ll get a confirmation e-mail after that. Click the link in the e-mail and you are ready to go!

After logging in, Fantasybet platform guides you directly to the lobby. The idea is similar to online poker: each tournament has a different buy-in, prize pool and a set of rules.

You can filter the list by competition, game rules, buy-in and tournament duration. Move your mouse over Tooltips in the list header. You’ll get explanations to all icons shown in the Tooltips column.

The most typical icon is GTD, which means there’s a prize pool guaranteed by the operator. The icon M means multiple entries are available.

NSB and SIX are often used together. SIX means that a user must choose only six players (instead of 11 + subs) and NSB stands for non-standard budget. When the number of players drops to six, the budget is also adjusted down from the one used with a full squad.

Fantasybet has a weekly freeroll available for each Premier League round. Freeroll is a term used in online poker, and it means the tournament is free to play (no buy-in required). Such tournaments are perfect for newbies to try their skills.

If you want to play for real money, you must make a deposit. There is an arrow pointing down in the top menu next to your balance. Click that, and a dropdown menu opens. You can add funds or a make a withdrawal from this menu.

Fantasybet offers a 100% first deposit bonus up to £200 with the bonus code WELCOME. This is a fantastic offer, but it’s available only once. Think carefully before making your first deposit, so you can claim the maximum amount of free money.

Fantasybet supports popular deposit options: VISA, Skrill, Neteller and Paysafecard. Your VISA deposits will be limited to 500£ before completing the standard KYC process.

Remember to type in the correct bonus code while making the deposit.

How to play and win money at Fantasybet

Once you have made a deposit, you can start playing for cash. Click GAMES from the top menu and select the tournament you want to participate in by clicking the arrow at the end of the row.

A popup opens next, where you can review the tournament rules and confirm your participation. Once you have entered the tournament you can start selecting players. 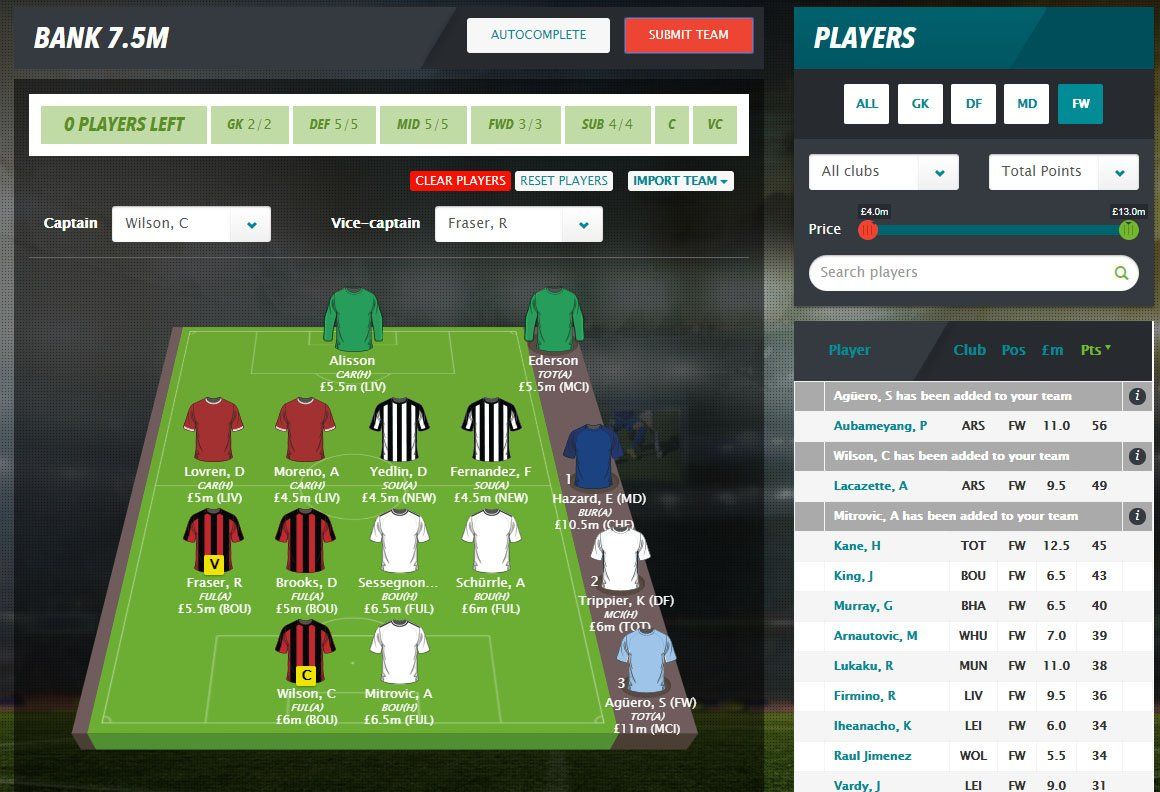 The player selection is very easy for anyone, who has played fantasy football before. The idea is no different from FPL: you must pick 11 starters + 4 substitutions with a limited budget.

You can filter the player list by position, club, total points and price. You can also search for an individual player. After building your squad, you must select a captain and vice-captain. They work like in FPL, meaning your captain gets double points. If he’s out injured, the vice-captain will get double points.

If you are inexperienced in fantasy football, check the following articles for tips. They are written for Fantasy Premier League (FPL), but the ideas can be used for Fantasybet as well.

There is one thing you must understand, if you want to make money at Fantasybet. Player prices are fixed, just like in FPL. This means, that Harry Kane is priced at 12,5M whether he plays at home against Fulham or at away against Manchester City. There is obviously a massive difference in his scoring chances in those matches.

Some daily fantasy games have dynamic prices, which mean they change based on the fixture. Harry Kane might cost 18M against Cardiff at home and just 6M against City at away. This is how Fanteam works for example.

Fixed prices give more opportunities for smart managers. This is where our unique fantasy football fixture tracker comes along. Even if it’s designed for FPL, you can use it at Fantasybet as well. Use the fixture tracker to see the scoring potential of each team. That will help you to find over-priced and under-priced players from the system.

Fantasybet scoring system is easy to understand for anyone, who has played FPL before. The point system is practically identical in the normal game mode. There are some differences in the Six-A-Side system, which you can check from the footer menu.

There’s one positive feature with the deadline: tournaments close eight (8) minutes before the first match starts. If you have entered a team, it’s still possible to make changes until it’s three (3) minutes to the kickoff. In FPL the limit is one hour, which means checking starting line-ups is not possible.

There are also couple of different game types in addition to the normal daily / weekly tournaments.

Even if Fantasybet is a DFS platform, they also run a season game. For the 2018/2019 season it was a massive £100.000 prize pool tournament in the Premier League! You can really turn your knowledge into cash in that one.

In addition to the £100,000 tournament, there are also prizes for ”Manager of the Month” (£1,000) and ”Manager of the Week” (£100). The manager that generates the most points within a calendar month wins the prize.

Fantasybet speciality is a tournament type called Flash mode, where you must make your team selection in three minutes.

Fantasybet is one of leading daily fantasy platforms in Europe. It has grown steadily over the years as the £100.000 PL season tournament prize pool proves. Fantasybet has been around since 2014 and established itself as one of the favourite DFS providers.

The site has all the necessary functions and the scoring system is easy to understand for players coming from the FPL world. Fantasybet get their stats from OPTA, which ensures there are never any glitches in the data.

Fantasybet is also active in the social media and co-operates with some of the most known social media figures in the FPL genre. They have a good reputation and fast customer service as well.

It is also possible to create your own fantasy games and challenge your friends in an invite-only tournament.

Fantasybet is one of the sites any active DFS player simply must register to!

There are some differences between Fantasybet and other European DFS providers. The closest competition is Fanteam, so let’s do some comparison between these two.

The major difference comes from the different sports and leagues. Fantasybet offers just football, while Fanteam has also ice-hockey, basketball and even golf. The amount of football tournaments is also higher at Fanteam, though many of them have basically no action.

There is one major difference in player prices, as explained above. Fantasybet prices are static, while Fanteam prices change dynamically from game to game. Players coming from the FPL world like probably the static prices better, and they’ll also give different opportunities for managers with tools (such as our fixture tracker).

Fantasybet has two major benefits for newcomers: freerolls and deposit bonus. Fanteam doesn’t currently have either one.

Tournament prizes are on the same ball park. Both offered a 100K Premier League season game this year. The major PL weekly tournament is currently 20K at Fanteam and 10K at Fantasybet. Some smaller tournaments are bigger at Fantasybet.

All in all, both sites have some benefits over the other.

Most of the fantasy players are only interested in the English Premier League. If that’s the case, you’d try Fantasybet and take advantage of the 100% first deposit bonus!

Check also our other daily fantasy reviews from here.

PlayON is a UK-based daily fantasy provider. The platform has a strong focus on English audience by offering rugby and cricket fantasy games. This article is a PlayON fantasy review. We’ll go through the essential […]

ntZweeler is one of the most interesting daily fantasy platforms in the European market. The website offers a wide range of sports and different game formats. This article is a Zweeler review. We’ll go through the […]