Fantasy Premier League (FPL) is a free game played by millions of people around the world. It allows you to be a manager of a virtual football team. Each manager has a £100m budget for picking 15 Premier League players. Those players you have chosen are credited with points based on their performances in the real Premier League matches! You can also change your team’s formation and transfer players in/out after each game week.

What is Fantasy Football and Fantasy Premier League?

Fantasy football is an online game, where individuals get to build their own football teams. In USA it’s about American football, while in Europe the game is about soccer. In this article we focus to the European fantasy football, or you can say the guide of how to play fantasy premier league.

Nowadays there are lots of fantasy football games available. Almost every country has their own games, which are usually run by the media houses owning the tv-rights as well. The most famous game is the official Fantasy Premier League (abbreviated: FPL). It has grown bigger every single year. Nowadays there are almost six million players participating.

What is the purpose of this game, then?

The idea behind FPL is to give everyone a chance to be a manager of a virtual football team. The difference to Hattrick or other virtual managers is that the player pool consists of real players of the Premier League teams. Each player is given a price and there is a limited budget set for the manager. You can build a team of your choice and compete against millions of other players.

Many enjoy fantasy football because it’s a free alternative to betting. It makes watching matches more exciting for sure.

Nowadays there is also money involved. People are making bets against their friends, and there is also a sub-genre called DFS (Daily Fantasy Sports). That offers weekly and daily tournaments just like in poker, where you can win thousands of dollars with a stake of 5-10$. If you want to know more about the daily fantasy, read this article: what is daily fantasy football?

How Do You Join the Fantasy Premier League?

Let’s begin! The instructions in this article are made for a desktop version. If you are using your mobile, some features maybe look like a bit different.

As explained above, FPL is about real teams and real players. This means it’s also about real fixtures. A new Fantasy Premier League season starts in August, and there’s a summer break as well. You can start playing FPL at any time. If you are not in from the beginning, you are obviously going to miss a lot of points.

How to play fantasy premier league is a question that needs a suitable answer and for this you need to start playing, go to fantasy.premierleague.com and click the Sign-up button. Fill in your details, confirm your e-mail address and you are ready to login! The game is totally free to play.

Once you have logged in, there’s an empty team on your screen. The next step is to start filling it with players. Below is a picture of a ready team with some players color-coded, but we’ll look into that a bit later. 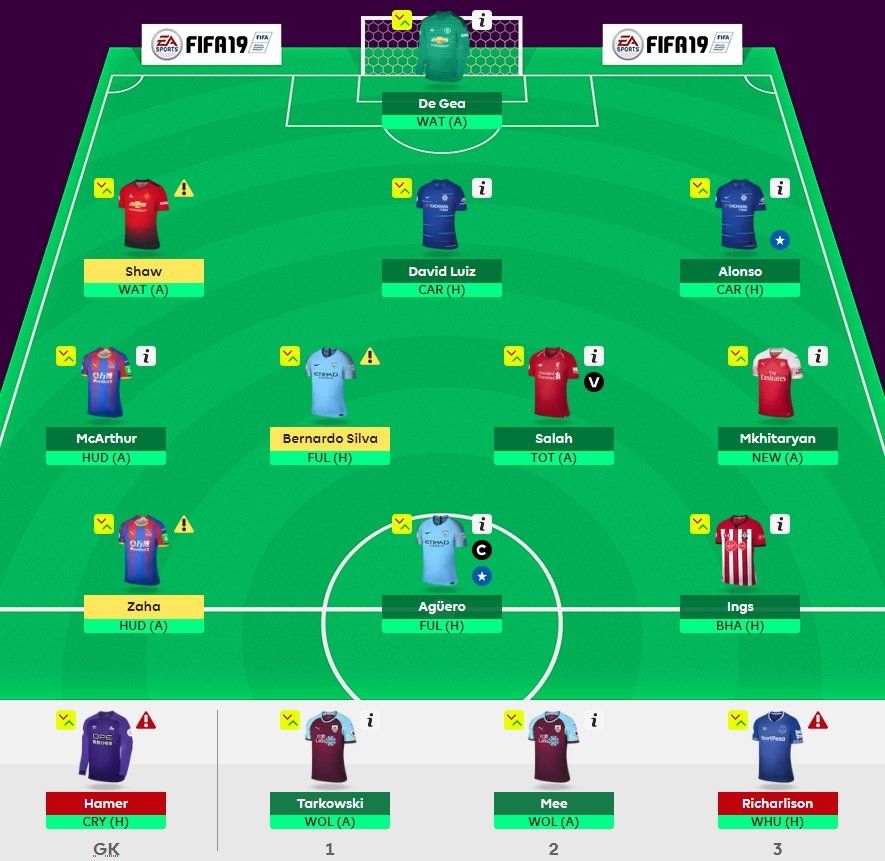 Your task is simple: pick 2 goalkeepers, 5 defenders, 5 midfielders and 3 forwards with a budget of £100m. This means you have £6.67m per player to use. If you pick some of the most expensive players to your team (such as Mohamed Salah at £13m), you have to balance them by picking some cheaper players as well.

If you want to know how to play fantasy premier league as well as how to find the best players for each position, check out these articles:

Important! You must spend some time creating your team because your options for modifying it in the future will be limited.

Use the player selection sidebar to find your favorite players for each position. Once you have created your team you need to give it a name. Then you are ready to go!

There is a deadline for each game week. It’s set to exactly one hour before the start of the first match. There are no exceptions to this. If your internet doesn’t work, if you missed the deadline by 10 seconds – too bad. Hence, it’s better to make your weekly changes well before the deadline.

Let’s look at some tasks you have each week.

Suspended or injured players are color-coded (see the previous picture). Players are often also doubts. When you click the yellow notification icon, the popup will tell you the probability for the player to feature.

Remember, that you can only make only one free transfer every week. You can make more if you want, but extra transfers will cost -4 points. If you find yourself getting minus points every gameweek, you are not planning your team properly. Read more about this from the article: FPL strategy tips.

You can always make changes inside your team without any penalties. You can change the formation, move players to different positions etc. But once you remove a player from your team and bring in a new one, it’s a transfer.

You have to also select a Captain and a Vice-Captain every week. This is an important choice because the Captain will get double points. This is typically one of your most expensive players (like Sergio Aguero) unless he’s having an exceptionally difficult fixture against one of the top teams. Vice-Captain is used if your Captain doesn’t feature at all.

You must also decide the order of your bench. This is also relevant because players are used in a certain order. The substitute number one comes in first if one of your starters doesn’t feature at all.

As you can see, there is some housekeeping needed to be done each week. The most hardcore players can spend endless hours browsing match reports, stats and watching games. More casual players might only log in for 5 mins. You can choose the level you want to participate in yourself.

Once the deadline has passed, the actual game begins. The players you have chosen get points when they perform in the actual Premier League matches. If you have Sergio Aguero in your team, he will get FPL points every time he scores a goal for Manchester City.

When the matches kick off, you can check the teams of all other players as well. You don’t see the changes before the deadline, only after it. This way you can’t copy anyone’s team before the round starts. You can cheer for goals your team is playing and also goals that are made against your opponents’ defenses!

Fantasy Premier League players get points in the following format.

As you can see, the scoring is quite simple. The key factors for each position are as follows:

Some other fantasy football games might have more complex scoring systems. There are for example 0,1 points given from every tackle or something like that. FPL rules are simple, and that’s why the game is so popular. It’s easy to compare players against each other when the scoring potential doesn’t require an excel sheet to be solved.

In case it wasn’t obvious already: you get points for players who are selected in your starting XI. The bench players will get points only in theory since they are not counted in unless the player is substituted in. A bench player is only used if one of your starters didn’t feature at all. Even if he comes in to play for one minute at injury time, no sub will be done. This could be sometimes very annoying if your bench player scored a lot of points.

In Fantasy Premier League the bonus points are the central element of scoring. These points are collected and allocated post-match according to a BPS (Bonus Point System). The BPS uses a variety of data, which is delivered by Opta and it detains all the actions occur on the pitch. All it happens to make a performance score for each player.

(How to Play Fantasy Premier League)

There are a few special tricks available for each manager. These are called chips, and they are visible below your squad at the My team page. You’ll see three PLAY buttons there: Bench Boost, Free Hit, and Triple Captain. Each of the chips can be used only once during the autumn period and once during the spring period. You can also use just one of the chips at the time.

How do these chips work? Here’s a quick explanation:

Then you have the Wildcard, which can be activated from the Transfers page. There is one Wildcard available for the autumn period and one for the spring period. The wildcard allows you to make unlimited transfers without any minus points. It’s usually used after 4-5 rounds by players, who feel they made mistakes in the opening rounds and want a fresh start. The wildcard can be also used if you get lots of injuries and suspensions to your team.

At spring season you’d save your Wildcard to the final rounds, where some teams have two matches inside one gameweek due to postponed games. You can read more from our FPL Strategy Guide article.

Joining Leagues and Other Interesting Stuff

If you get a feeling that how to play Fantasy Premier League has actually a quite easy answer, you are not mistaken. All you need to do is pick 15 Premier League players and see how they perform. The fun part is that anyone can beat anyone in FPL! Even if you are a complete newbie, you might get lucky and pick some players even the gurus missed.

The actual game play is not difficult, which is why FPL is also so popular. But even finishing in the top 100.000 is one hell of a task! The world is full of fantasy enthusiasts, who spend endless hours analyzing the players. This game is easy to play, but you’ll see how difficult it is to be at the top after a full season.

You probably want to play against your friends or maybe against other managers in your country. Go to the Leagues tab to join leagues or create your own. Twitter is a good source for leagues. You can make a post or follow others with the hashtag #FPL. There’s lots of discussion going on every day.

You can also check the All FPL tips page at our website. From there you’ll find lots of useful websites, who usually have their own FPL leagues created as well.

The Status tab a.k.a FPL front page offers also interesting information. You can see what other FPL managers are transferring in and out. The page shows also the best teams in the game and the latest injuries and suspensions.

You’ll find all relevant player stats from the Statistics tab. The Scout tab gives you player tips. If you are unsure of any of the rules, look at the Help page.

Can You Play a Wildcard and Triple Captain in the Same Week?

In a Gameweek, only one chip may be active. It is not possible for instance to make moves with your wildcard chip and use your Bench Boost chip subsequently in the same Gameweek.

If you want to take your team to the next level, go back to our FPL guide and keep reading. There are useful strategy hints and tips for how to play fantasy premier league and how to find the best player for each position. Finally, we’ll show you how daily fantasy football works. That is for players, who want to earn cash with their Premier League knowledge.