PlayON is a UK-based daily fantasy provider. The platform has a strong focus on English audience by offering rugby and cricket fantasy games. This article is a PlayON fantasy review. We’ll go through the essential features and review PlayON from a player’s perspective.

PlayON has operated since 2012

PlayON is one of the oldest daily fantasy providers in Europe. The site has been live since 2012 and it’s operated by Tradeplayer Limited. PlayON has users from over 100 countries and the site is translated in 16 different languages. PlayON has established itself as one of the leading European DFS operators. They’ve also featured on big news sites like ESPN and Reuters.

The company’s goal is to create the best possible online sports entertainment experience for current and future sports fans. They want to raise the profile of Daily Fantasy Sports globally and develop long-term partnerships with global sport brands.

Daily fantasy football (DFS) means playing fantasy football for cash. In PlayON’s case we are also talking about formula 1, basketball, cricket and other sports. The word daily refers to the length of the tournaments. They are typically one gameweek, one race, one weekend or a single match.

In daily fantasy sports you are playing against other users, not the house. The operator sets up the gaming platform and creates tournaments with prize pools.

Registration is free and there are no monthly fees. There are also freerolls available, where you can win cash without deposit.

Once you enter the site, click the blue Join now button. All you need to do is fill your name, e-mail and password. After registration you need to also confirm your e-mail address.

Now it’s time to check out the tournament selection. After logging in, a dashboard page shows up. Click the Games Lobby link to view the tournaments.

There are lots of different options and filters in the tournament menu. The blue bar shows different sports PlayON has in offer. NEXT LIVE is selected by default. FEATURED link shows you the top tournaments. 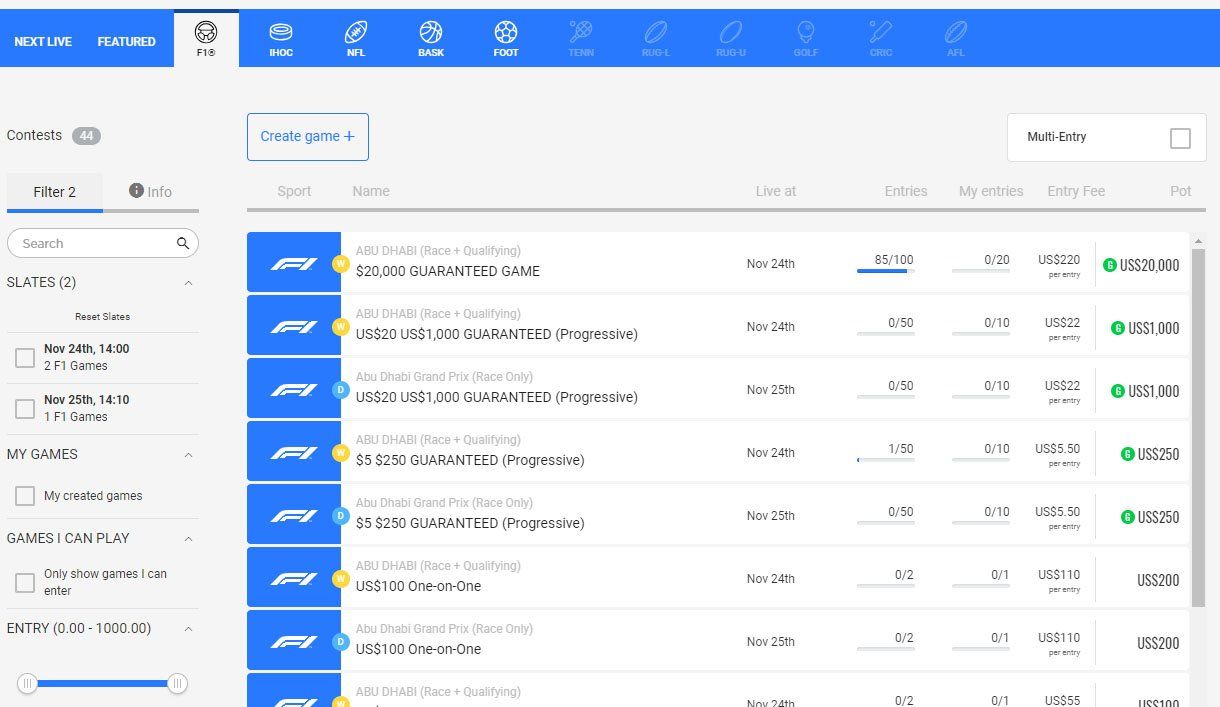 You’ll find more filters from the left menu. If you click the Info tab, you’ll get tooltips for icons in the tournament list.

Tournaments can be filtered by timeframe, game type and payout type. There’s also a checkbox titled Games I can play. This is due to regulatory reasons: some tournaments are only available in certain regions. You’d check this box to filter out unavailable tournaments.

PlayON offers lots of different tournament types. There are daily, weekly and single-match contents. You can also play a H2H game against one single opponent.

The multiplier game types might be unknown to some. It is similar to Double or Nothing format in poker. For example, a 2X multiplier means that the upper half of the ranking list doubles their money and the lower half get nothing. In a 3X tournament upper third triples their money.

Note that almost all PlayON tournaments are capped with entrants. If there’s a tournament you like to participate, you might be left out if you don’t sign in early enough.

In order to win money, one needs to make a deposit first. You can also try to get a small bankroll by winning one of the freeroll tournaments. The chances for that are quite slim, though.

Deposits with credit card, Neteller and Skrill are supported. We recommend using the eWallets (Skrill & Neteller), since they are easier and faster in the withdrawal process. PlayON allows deposits only from Australia, UK and Ireland for now.

PlayON has a massive 100% deposit bonus up to £1000! This is by far the biggest bonus in daily fantasy genre and it’s difficult to find such a bonus anywhere.

Remember that this bonus is available only once. Think carefully before making the first deposit, so you can claim the maximum bonus amount.

Check also bonus terms & conditions before depositing. If you are unsure of the conditions, contact PlayON support (info@playon.co).

There’s a standard KYC process you must go through before withdrawing any winnings.

How to play and win money at PlayON

If you have added some money to your balance, you can enter one of PlayON’s cash games. Click Lobby from the top menu to view open tournaments. Find a tournament you want to participate and click it in the lobby to proceed.

Remember that tournaments are opened periodically. If you are looking for weekend action in the Premier League, there might not be open tournaments yet on Monday lunch time.

A team creation page opens next. 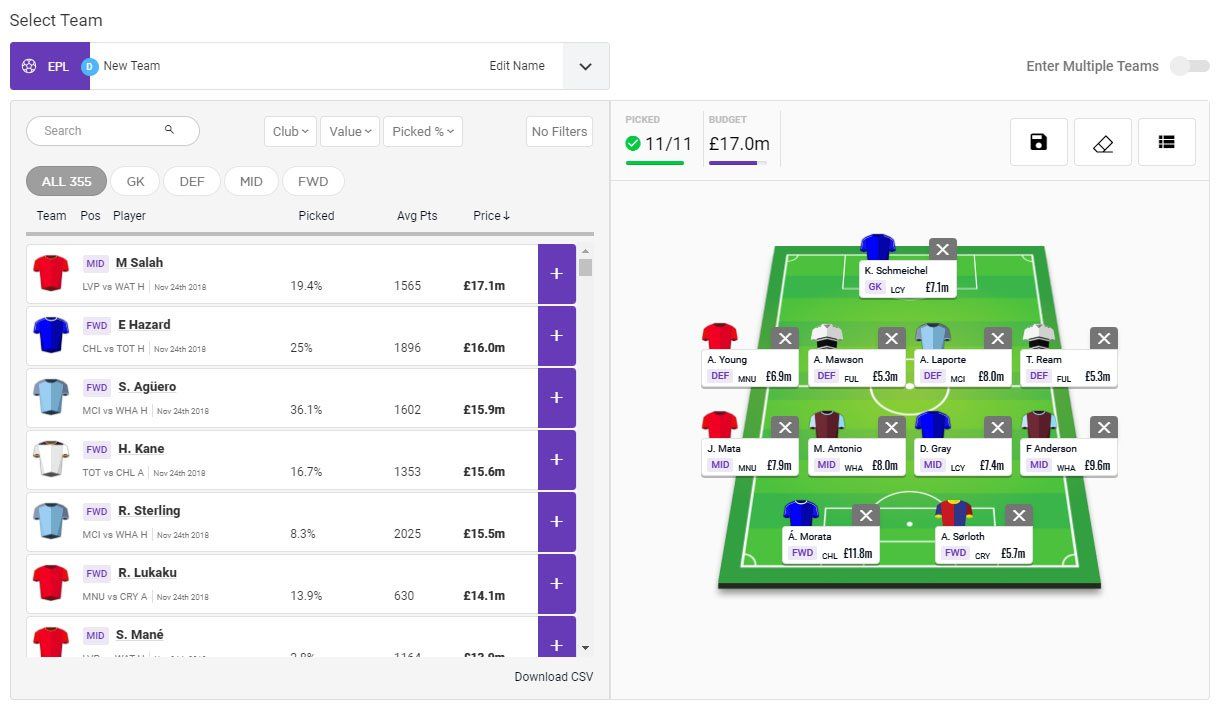 PlayON’s interface is pretty similar to industry standards. You have the team on one side and the player list with filters on the other side.

You can filter players by club, position and value. It’s also possible to search a player by name and sort the list by any of the columns.

One useful feature is the Picked %. It shows you the popularity of the player among your rival fantasy managers. Note, that these percentages are skewed until the number of participants has grown to several hundred.

PlayON has a fixed formation in football, which means you must always build a team with 4-4-2 formation.

If you a newbie in fantasy football, we recommend checking the following articles for guidance. They are written for the official FPL game, but you can use the basic concepts at PlayON tournaments too.

It’s also possible to play NBA fantasy, NFL fantasy and even Formula 1 fantasy at PlayON. You need to create a team in similar fashion in those tournaments. Positions and filtering varies a bit from sport to sport, but the basic idea remains the same. There’s a fixed amount of athletes you have to pick inside the given budget.

PlayON’s football player prices are fixed, just like in the official Fantasy Premier League. For example, Harry Kane costs the same at home against Fulham or at away against Manchester City.

There’s obviously a huge difference in his scoring chances in these two matches. He’s massively overpriced in the City fixture and undervalues against Fulham.

Fixed pricing structure means money-making opportunities for smart fantasy managers. This is where our unique FPL fixture tracker comes along. Even if it’s designed for FPL, you can use it at PlayON as well.

It seems PlayON makes some adjustments over time, but prices don’t change dynamically each gameweek based on the fixture difficulty. Dynamic prices make the game more realistic, but also a bit more difficult. Fixed prices great, if you are one of the smart managers using tools like the Fixture Tracker.

There are also few position differences between PlayON and FPL. For example, Eden Hazard is a striker at PlayON and the most expensive one as well. That makes him a less desirable player compared to other fantasy games.

PlayON’s European rivals (Fanteam & Fantasybet) follow the FPL point scoring closely. This is a good thing, because new players find it easy to adapt. The FPL scoring system has become an industry standard over the years. Almost all fantasy managers are used to it.

This is not how PlayON scoring works, though. The system is completely different from any other game. Below is the scoring matrix used in football. You’ll find this and other sports when clicking Games -> Points Scoring from the top menu. 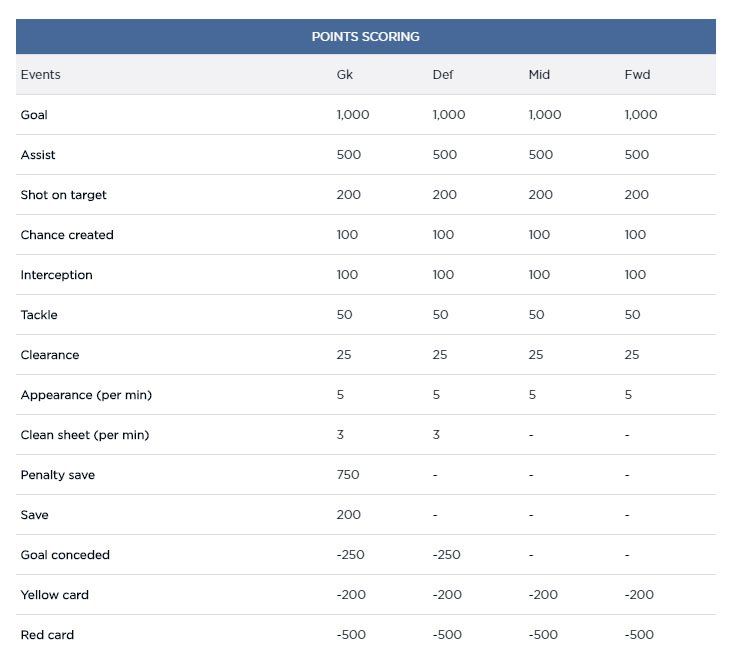 The scoring system in PlayON is a bit weird. This is the only game in the industry where players get the same amount of points from goals and assists regardless of the position. In fact, this is the case with most of the scoring matrix.

Only difference is that goalkeepers and defenders get a clean sheet bonus and a penalty from conceded goals. Goalkeepers get also extra points from blocked shots and penalties.

This scoring system is the biggest handicap of PlayON, because it’s difficult for a new player to fully grasp. Millions of fantasy managers are used to FPL-style scoring, but PlayON system is totally different.

It’s maybe a good thing that the formation is locked to 4-4-2. There’s still the issue if you want to spend 15 million to a 10M attacker and 5M defender or vice verse. The player potential between positions is difficult to compare – especially when clean sheet bonus is given per minute.

PlayON is one of the oldest daily fantasy operators in Europe. The UK-based company has offered fantasy games since 2012 already. PlayON have also established partnerships with many global sport brands over the years, such as NBA and Formula 1.

They have a solid customer base and a wide range of different sports. PlayON has also the biggest deposit bonus ever seen in the industry: 100% up to £1000. This is a big incentive for fantasy football fans to start playing here.

PlayON has a strong focus towards UK & Australian customers. Real money deposits are only available in UK, Ireland and Australia. The sport selection is also focused on the English sports. Rugby and cricket aren’t available elsewhere.

The biggest prize pools are also significant. For example, there’s a £20.000 guaranteed Formula 1 tournament. And the it’s 90% full already a week before the event even starts.  This site is a great option for UK-based fantasy players, but not the best place if you only like football.

Help & support part gets a negative rating. The e-mail answering time is long and the FAQ pages should have more helpful information to cover this lack.

There’s one extra bonus as well: check out the site Daily Fantasy Focus. It has fantasy reviews for NFL and NBA produced by the PlayON team.

PlayOn vs the competition

There are some similarities and differences between PlayON and its competitors. Fanteam and Fantasybet have a strong focus on football and the English Premier League. Both have massive season games and 10-20.000€ weekly prize pools.

PlayON is not competing with these sites on football. The prize pools are small, and the scoring rules are weird. It’s difficult for a new player to move from FPL to PlayON and get a quick grasp of the scoring.

PlayON can be seen as an alternative to the multi-sport Zweeler. Both have relatively small tournaments making the site newbie-friendly. PlayON’s advantage is the Formula 1 partnership. They can offer massive tournaments weekly. If only the entries weren’t capped, the F1 prize pools would be even higher.

The biggest advantage of PlayON is the massive deposit bonus. Fantasybet and Zweeler have 100% up to 250€, but PlayON goes all the way to £1000. That’s a lot of bonus money to start playing with.

PlayON is the best option for UK-based motorsport & NBA enthusiasts. If you want to play Premier League fantasy with a serious approach, we recommend Fantasybet and Fanteam instead. 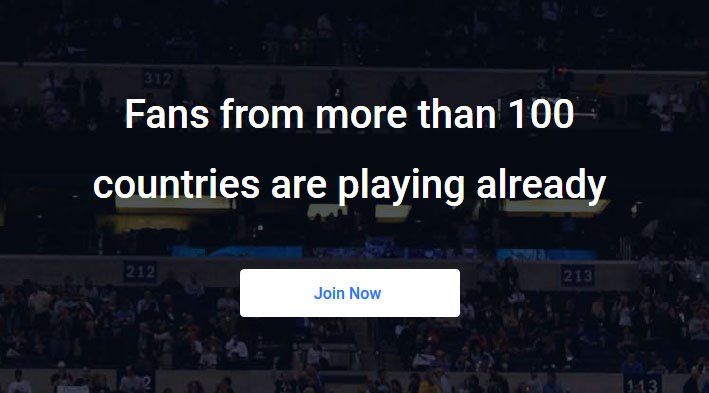 Fantasybet is one of the most popular European daily fantasy platforms. It’s a great choice for daily football enthusiasts, who want to play fantasy football for money. This article is a Fantasybet review. We’ll introduce […]

ntZweeler is one of the most interesting daily fantasy platforms in the European market. The website offers a wide range of sports and different game formats. This article is a Zweeler review. We’ll go through the […]