After launching the website at 2016, Sportito was also nominated as the best Daily Fantasy Sports product in the SBC Awards. This is a recognition of their fresh approach to daily fantasy. The platform is currently run under Maltese and UK gaming licenses.

As mentioned above, Sportito is a Daily Fantasy Sports (DFS) platform. Essentially, it means playing fantasy football for real cash. If you’re not familiar with the whole concept yet, you’d check first our DFS guide.

The word daily refers to the length of the tournaments. It’s opposite to season-long games like Fantasy Premier League (FPL), where you must compete for months to win anything. At Sportito, your tournament might last one match, one day or one weekend.

There are no sign-up fees or any monthly costs at Sportito. You can open a new account in few minutes and try it for free.

After following the link, click the blue SIGNUP button in the top right corner. Start by either typing your e-mail or register via Facebook/Google. If you register via e-mail, you’ll get a confirmation mail after filling in the basic information.

Next, it’s time to login to your Sportito account and check out the available competitions. You are first being directed to Sportito’s “Card view”, which is quite different from any of the competing daily fantasy websites.

These boxes guide you to different type of tournaments. If you find this interface difficult, click the SHOW ALL button in the bottom of the screen to view a the tournament list in a traditional way.

Sportito has a fresh approach to daily fantasy. Once you log in to the system first time, there’s a step-by-step guide with a free bet for you to join a £2 buy-in tournament. This is only available for other newbies such as yourself, which makes it easier to get a starting capital for free.

In general, Sportito is the only DFS operator limiting the tournament participations by player’s experience. You cannot join some tournaments as a newcomer, but there are also many tournaments available only for newbies. This means you don’t have to compete against sharks right away like on other sites. 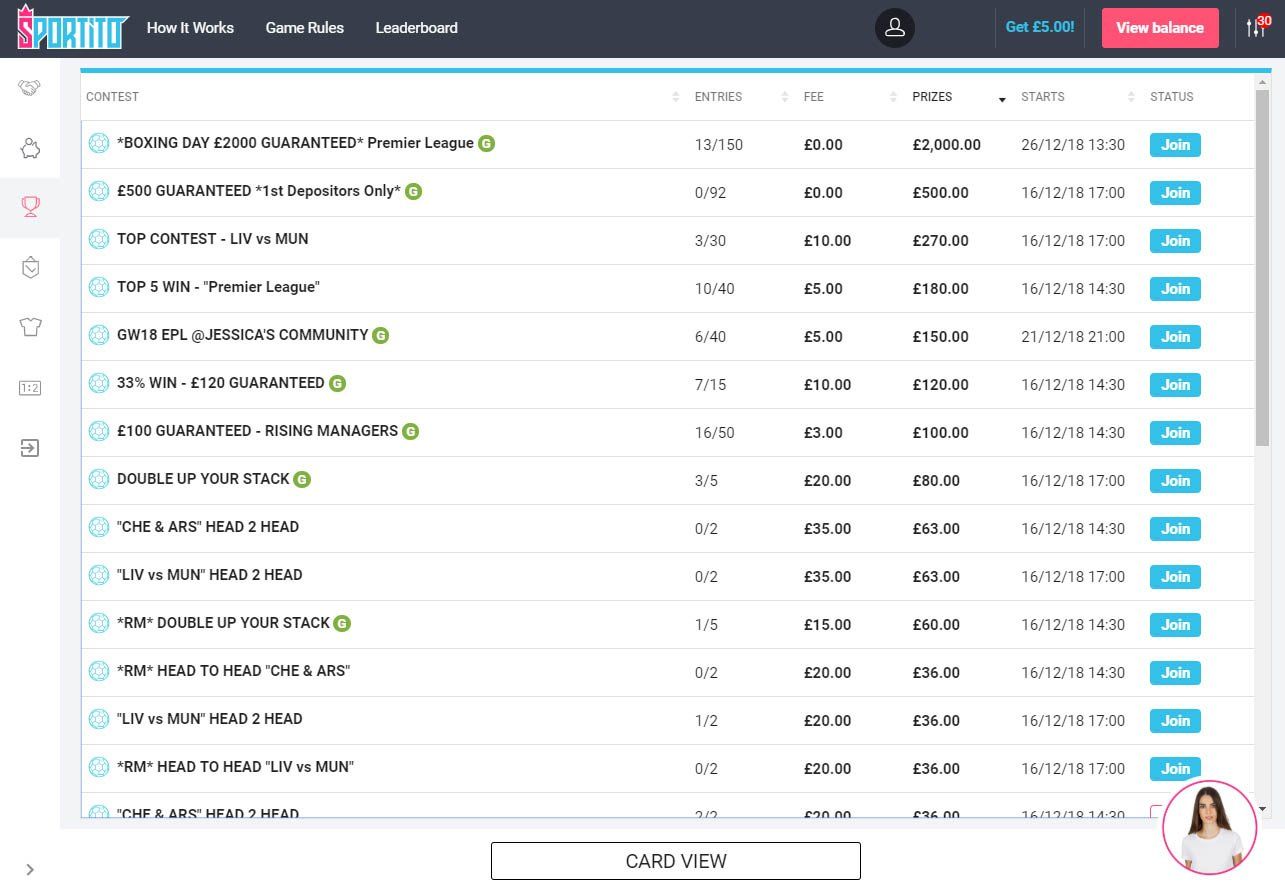 This is how the tournament list looks like in a traditional format. You can filter tournaments by type, date, fee, league and team. The filtering is done by clicking the icon in the top right corner of the page.

If you didn’t get lucky in your free bet tournament, you need to deposit some cash to compete for prizes. Click the red Add Funds button in the top right corner to proceed. 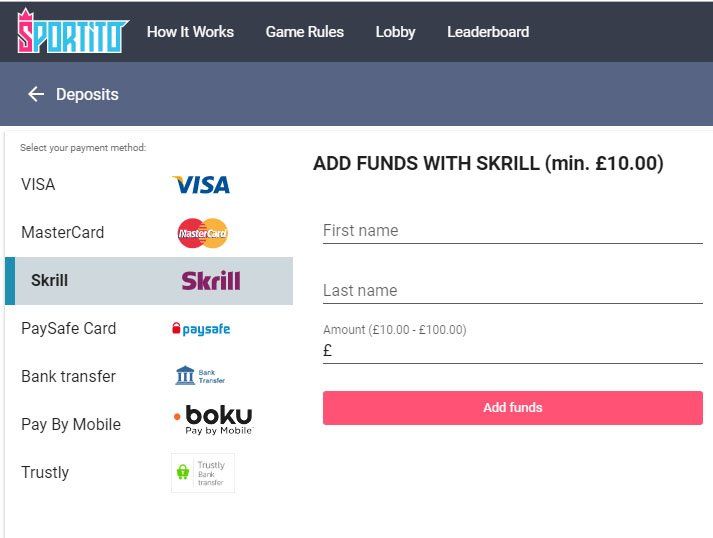 Sportito supports the most popular deposit and withdrawal options. I recommend using eWallets like Skrill in money transfers. It’s usually the cheapest and fastest way to get possible winnings out as well. Skrill transactions have typically the least technical issues. Many companies process Skrill withdrawals nearly real-time.

There is no traditional deposit bonus (like 100% / 100£) available right now. However, if you register to Sportito via our referral link, you’ll get a £5 bonus after the first deposit!

There’s a standard KYC process you must complete before withdrawing any funds.

How to play for cash at Sportito

Once you have funds in your account, it’s possible to compete for cash prizes. Go to Lobby and click Contest starting today to view the tournament list. Filter the competitions to find one you want to participate in.

Once you click the blue Join button, an information popup open showing the tournament details. Click Enter This Contest button to proceed to the team creation page. 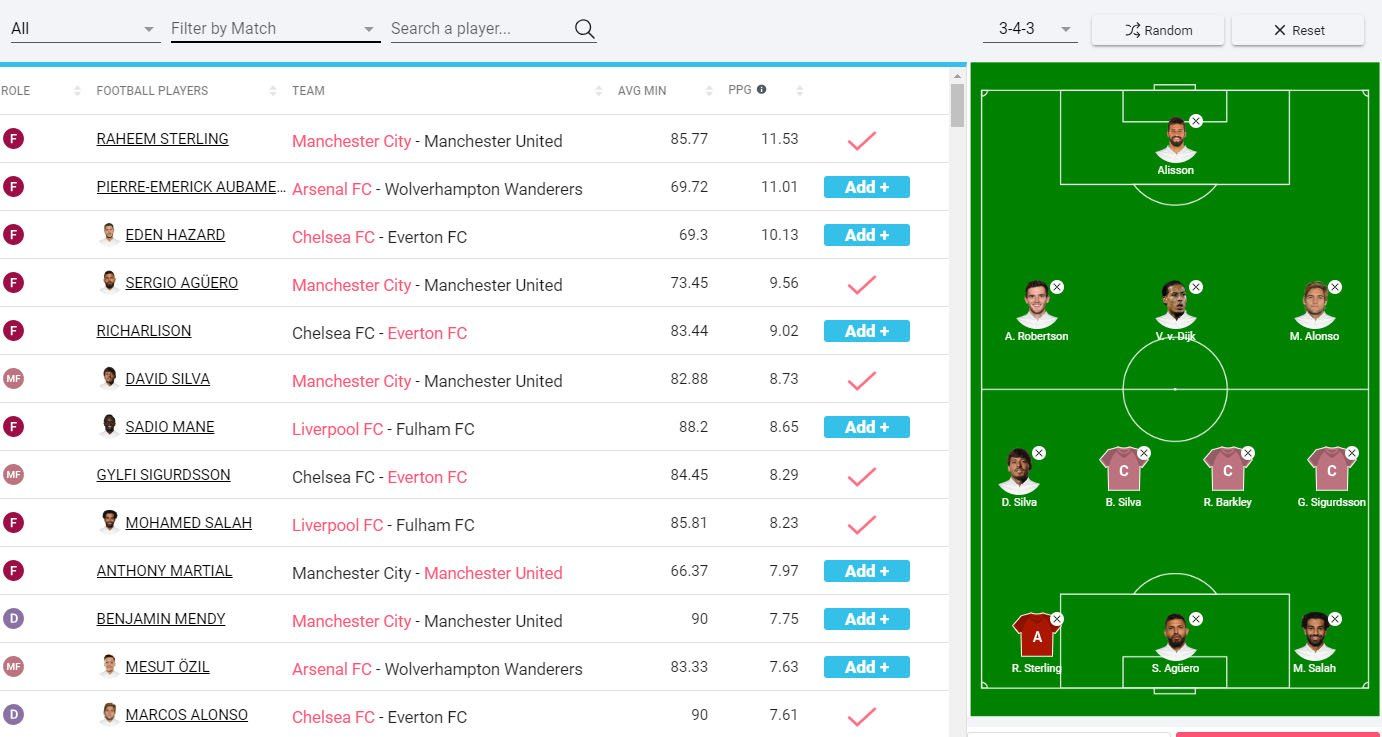 Creating a new team is easy, if you have ever played any fantasy football before. You have the players list on the left side and the formation on the right side.

Player list can be filtered by position, match and player. Click the player name to view his statistics. You can also sort the player list by each column: role, player, team, avg. min and ppg.

There is one major difference between Sportito and other providers: there is no budget. This means you can select any players you want to your team. The formation used is the only restriction for each position with the following rules:

This is once more a good feature for newbies – it makes the game easier for sure. More professional fantasy football enthusiasts may not like it, though.

Remember to click Save And Play button to confirm your participation.

Here are some useful links to help you with player selection. They are written for FPL but can be used in Sportito as well.

Sportito’s game rules are different from any other site. In a way, they remind us of FPL game rules. It seems Sportito has tried to fix the “simple scoring” of FPL by adding some extra features.

Sportito has made the most critical actions a bit more extreme. They give more points from scoring goals but also penalise from yellow cards, red cards and missed penalties. Sportito adds also points from playing minutes and scoring a goal with a header, which is a bit weird.

I think they could have very well just kept the FPL rules unchanged, which are so familiar to many people. Now the rules are a needlessly complicated compared to FPL.

This is the only daily fantasy platform with no player prices. Since there are no salary caps, players don’t have prices either. This is a good newbie feature making fantasy football more fun. Even some experienced enthusiasts might like the possibility to really pick anyone you like. The down side is that it leads to many identical teams especially in single-game tournaments.

Sportito stands out from the crowd in a positive fashion. They offer many unique features aimed for less experienced fantasy players. The site introduction is also great – each new user gets a low-barrier tournament entry for free.

There are dozens of different tournaments available each weekend with buy-ins starting from £0.50. There’s certainly something for everyone. Sportito has also different types of tournaments: H2H, Double or Nothing, Freerolls and qualifiers for bigger tournaments.

Sportito is by far the most active site to activate their customers via e-mail. You get more mails from Sportito in one month than from the rest of the sites in one year. Some people might not like it, but many of them contain information of special tournaments being arranged. 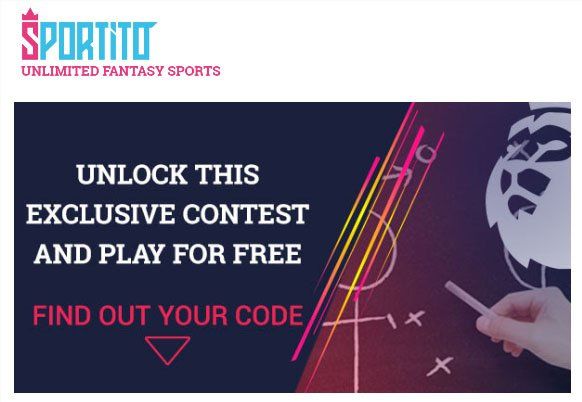 Sportito is aimed for fantasy enthusiasts, who want to have fun. Lower prize pools and no-player-prices game format keeps all the sharks away from this site. If you like to spend 10-25£ per weekend to daily fantasy and don’t want to compete against hundreds of professionals, Sportito is the place to go. The competition is not so fierce and there’s enough prizes to be won for small punters.

Each player gets also a personal assistant, who gives tips and bonuses along the way.

As mentioned few times already, Sportito isn’t built for the hardcore daily fantasy enthusiasts. It has a nice range of small prize pool tournaments, but not much for serious players, who want big guarantees with realistic game rules.

Sportito is the only daily fantasy site with free player selection. It makes the game very easy for newcomers, since there are almost no limits to team-building. It’s another positive newbie feature, which also keeps the sharks away. Here’s a quick video overview of the site:

Sportito doesn’t offer any deposit bonuses, which is a clear minus. You can more than double your initial deposit at Zweeler, PlayON and Fantasybet. However, Sportito has a free bet + additional £5 bonus money, if you register to the site via our referral link. Hopefully we’ll see a 100% / 100£ type of deposit bonus in the future.

When it comes to tournament selection, Sportito is behind the competition. They have probably the smallest number of open tournaments right now. The selection is pretty good, considering the number of leagues that exist. If you just want to play Fantasy Premier League, Sportito has you covered for sure.

The biggest Fantasy Premier League season game has 250 000€ in prizes!

Fanteam is the leading daily fantasy sports website in Europe. It is part of the Scout Gaming Group network, which has also half a dozen other fantasy sites providing liquidity. Fanteam is hosting the biggest […]

Daily Fantasy Sports (DFS) is the next step for fantasy football enthusiasts. We’ve seen DFS grow tremendously in the United States during the past decade. It has also landed in Europe in the previous five […]