The Telegraph Fantasy Football is a season fantasy game just like the official Fantasy Premier League. You’ll manage a squad of players from the first game week to the last. If you do well and beat all your competitors, you will be rewarded with cash prizes.

This game is hosted by The Telegraph, which is a UK-based newspaper. You need to create an account for The Telegraph to play. Entries are also restricted to residents of the United Kingdom, the Channel Islands, and the Isle of Man.

The Telegraph Fantasy Football is fairly easy to play for anyone who has played other popular fantasy games before. You must create a team of eleven players inside a given budget and try to maximize its scoring potential.

Even if the basic concept is the same, there are some differences in rules you must learn before playing. We will go through these next. Finally, we’ll give some tips on how to improve your results in this game!

Let’s start with the team creation. To keep the text shorter, we’ll sometimes use TTFF instead of The Telegraph Fantasy Football in this article. 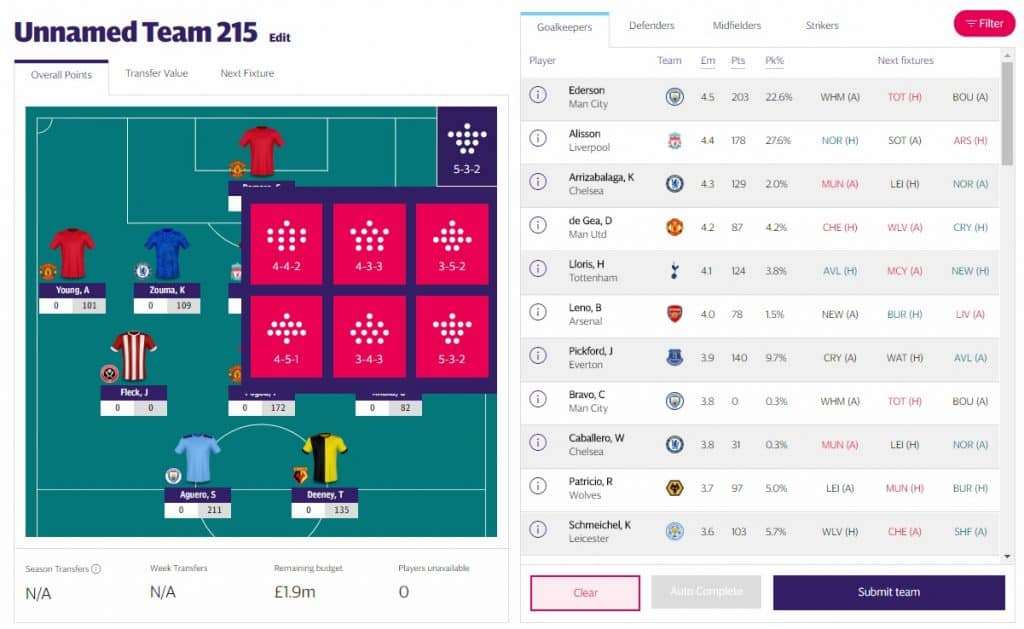 The pricing is quite similar to FPL if you just double the price of every player in your mind.

The biggest difference comes from defenders, which are almost twice as expensive in TTFF. For example, Van Dijk and costs 5.5M, but you have 50% smaller budget. Top goalkeeper Ederson is 4.5M, which would also translate to a much higher FPL price.

Finding players is no different from other fantasy games. You have the player list, which can be filtered and sorted by different values. In TTFF, Pk% is the same as the TSB% in FPL, meaning how many of all managers have chosen this player.

It’s very important to understand The Telegraph Fantasy Football rules fully before playing. You can access all FAQs and guides from the Info Centre link in the top menu.

First, you’ll notice that the special chips and wildcards are missing from TTFF. This makes the game somewhat simpler, which is not a bad thing.

The second major difference comes from transfers. In FPL, you have one free transfer per game week and -4 points penalty from any additional ones. In TTFF, you have a seasonal budget of 40 transfers. This means you have about one transfer per week on average and there are no wildcards, so you have to be more careful in TTFF with your transfers.

Embed from Getty Images
You can use up to five (5) transfers per game week in TTFF. There is also another significant difference: you can make transfers in the middle of the game week if there are at least two hours in-between the kick-offs.

For example: if you have a 12:45 kick-off and 15:00 kickoff, you can make a transfer in-between these rounds. The transfer deadline is 2 hours before the matches start. This means that you can’t use the latest starting XI information.

Even if you can’t use the starting XI information (they are confirmed one hour before the kick-off), you might find fresh injury information to a late Saturday match or Sunday matches over the weekend.

Let’s look at other rules and the scoring system of The Telegraph Fantasy Football as well.

One major difference to any other Premier League fantasy is the fact that FA Cup matches are included as well. These might be times when you can cash in some good points if your team is facing a very weak opponent at home. You must often use transfers, though.

The scoring rules are as follows:

Goalkeepers only:
• Penalty save (5pts)

The rules are quite similar to FPL with some differences. As you can see, goals are as valuable to all players, which favours strongly all attacking players. Though, defenders one extra point from the clean sheet and bonus points are missing.

Bonus points are typically given to the top scorer of the game in FPL, which just adds value to the top strikers like Aguero or Salah. If we look at the top points on each position, this scoring system looks quite decently balanced.

There are no other special rules to know. A different transfer system is the biggest deal.

You can also create private leagues and join leagues created by others in TTFF.

The Telegraph Fantasy Football is giving out £15.000 in prizes this year. It’s a nice motivation to play the entire season!

The main prize pool is as follows:

This means that there is £4,550 handed out on other prizes.

There are four different special leagues, where the winners get £200-£1,000 prizes. On top of these, TTFF is also giving a small cash prize for the best manager of each month and each game week. So, even if you’d lose your overall chances early on, it’s still worth competing for smaller prizes.

You can check all the prizes from The Telegraph Fantasy Football info centre.

You can use your generic fantasy football knowledge to win prizes in TTFF. You can scout and pick players in a similar fashion and all the basic strategies apply to this game too. We recommend reading our FPL strategy tips for some good advices.

As mentioned in this article of FPL strategy tips, there is a very powerful tool for you called FPL Fixture Difficulty Tracker. It’s 100% free to use and it shows you the scoring and clean sheet potential of each team for several game weeks ahead.

Learn to use the FPL Fixture Tracker and see which teams have good (= better than average) schedules ahead.

Even if you can make 5 transfers per round in The Telegraph Fantasy Football, you have just one per game week on average. You must be very rigid and choose players, not because of one good fixture but because of the good run of fixtures, there is coming.

We recommend saving your transfers as much as possible for injury situations, where you need to alter your team a lot. Sometimes you can also gamble with top players like Salah or Aguero if they have a very potential Sunday fixture but you don’t know on Saturday if they’ll play or not. The transfer rules of TTFF will allow you to make a move on Sunday too.

And don’t forget the FA Cup! We don’t recommend to waste transfers to FA Cup squads in the early rounds. Wait patiently for the 5th and 6th round and stronger squads and then spend your transfers wisely to include some potential players, who’ll have FA Cup fixtures as well.

If you want to turn your fantasy football knowledge into cash, it’s possible! There are tens of thousands of euros in daily fantasy prize pools every week. We have reviewed the best European daily fantasy providers. Check out the list below and claim some fantastic deposit bonuses!

Image by Pexels from Pixabay,