Defenders and goalkeepers are the backbones of your Fantasy Premier League squad. They get far too little attention compared to their importance. Hence, there are probably more newbie errors done in selecting the best premier league defenders compared to midfielders and forwards. Who are the best Premier League defenders? How can you find the top FPL goalkeepers? This article will reveal it to you.

The best Premier League defenders are usually full-backs or wing-backs, who are given an attacking role. In modern football, they are responsible for many crosses to the penalty box. These will eventually lead to goals and assists. The ultimate defender has also set-piece duties! Centre-backs are often getting their goals from set-pieces. Their main source for points is clean sheets. You must make some compromises in your squad: do you spend a lot of money on full-backs or pick cheaper centre-backs instead. We also explain a few characteristics of goalkeepers in Fantasy football.

There are basically two types of defenders in the starting XI: full-backs and centre-backs. A full-back is a general description for the best Premier League defenders playing on either side of the pitch. In a typical four-man defense there is one right-back, one left-back, and two centre-backs.

There are also a couple of variations to the standard formation. Back in the old days, a five-man backline was used when the manager wanted to make his team even more defensive. This still happens, but in a modern football, a 5-3-2 (or 5-3-1) has been often transformed into a 3-5-2/3-4-3 formation. When a team is attacking, full-backs are pushing forward and act like wingers. In a 3-4-3/3-5-2 formation, they are called as wing-backs.

The difference between full-backs and wing-backs depends on their individual roles. If a team is playing a modern 4-3-3 system, full-backs might have extremely attacking roles as well. By default, they are positioned a little further back.

If you want to have a defender with the maximum attacking threat, pick the player who features as a wing-back in a 3-4-3/3-5-2 formation.

Differences between full-backs and centre-backs

Now we have established the ground for defensive players. There are centre-backs and more attacking full-backs/wing-backs. To make things easier in this article, we just talk about full-backs, when we mean both full-backs and wing-backs.

What is the difference between these players in fantasy football? Which ones are better? 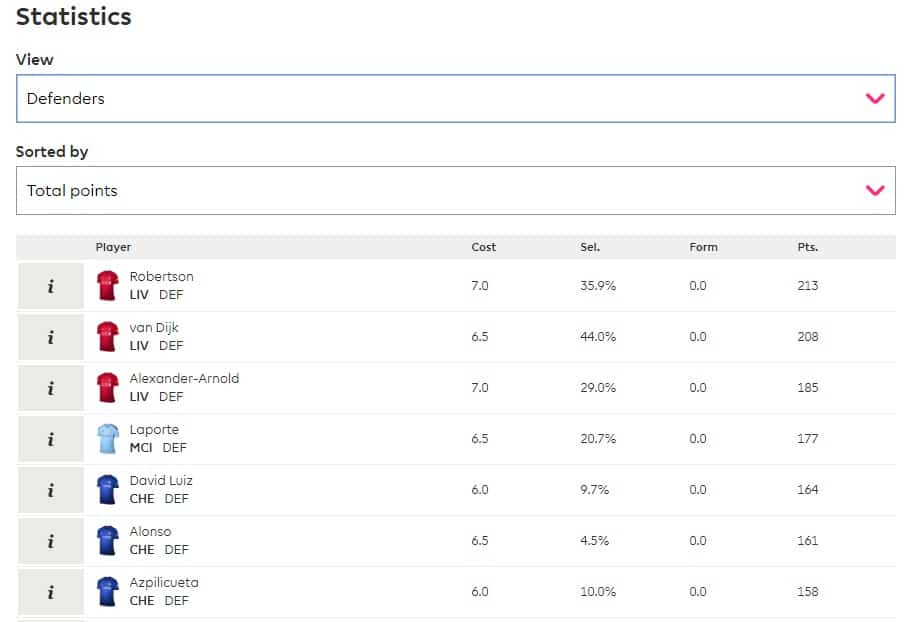 The main difference between these players comes from their position and role on the pitch. In modern football, full-backs are supposed to support the attacks. They are often playing one-twos with attackers or midfielders and positioned high on the pitch. Back in the old days, it was wingers in a 4-4-2 formation providing crosses to the penalty box. Nowadays it’s often a full-back.

This means that full-backs are much more likely to get assists to their name. Some of the full-backs are also given set-piece duties, such as Trent Alexander-Arnold, Leighton Baines or Aaron Cresswell.

Centre-backs don’t practically ever get assists or goals from an open play. A modern centre-back is a very good passer, but they are often giving the first pass when initiating an attack. The forward-move is then finalized by midfielders and attackers above him.

Centre-backs get goals (and sometimes assists) from set-piece situations. They are often the number one targets in corner kicks. Another source for extra FPL points is bonuses.

FPL Points for full-Backs and centre-backs

We went through the differences between full-backs and centre-backs in the previous chapter. Now, let’s dive more into fantasy football defenders.

You might think at this point: “OK I got it, I will just pick full-backs to my team because they are more likely to get goals or assists.” Good thinking… but this does not work in practice. The problem comes from player prices. Fantasy Premier League has made full-backs more expensive than centre-backs. The reason comes from their fantasy point potential.

You cannot build a team by picking the most expensive players in every position, because there is a limited budget. Some compromises must be made.

There is also one other element to this: bonus points. These come usually into play in a low-scoring match, like 0-0, 1-0 or 1-1. The BPS (Bonus Point System) rewards players also from successful tackles, recoveries, high pass completion, etc. The most active centre-backs get often a lot of bonus points if their team keeps a clean sheet.

If we look at the bonus points in the 2018/2019 season, four out of the five best Premier League defenders were centre-backs.

There are some centre-backs, who simply get more bonus points than others year after year. You can use this page to view bonus points from the current and the previous season.

There are some exceptionally best Premier League defenders in fantasy football due to special circumstances. The first group is a very small one, and it’s called set-piece takers.

We can say almost without an exception, that defenders taking set-pieces are full-backs. This is because centre-backs are positioned to the opponent’s penalty box when a team is given a free-kick or a corner-kick. There are few so talented full-backs, that they can also shoot the ball to the net from a direct free kick.

Everton left-back Leighton Baines was known for years from his set-piece duties. Baines was a rare example of a defender shooting his team’s penalty kicks. The best Premier League Defenders giving set-pieces are usually quite well-known.

Defenders playing on midfield are sometimes overlooked, especially if we’re talking about smaller teams. There are also some extreme cases of best Premier League defenders playing as attackers. Fulham’s exceptionally talented Ryan Sessegnon was rated as a left-back in some fantasy premier league defenders games despite the fact he was their left-sided forward in a 4-3-3 formation.

A full-back playing as a winger was more common when teams were using 4-4-2 -formations. Nowadays it’s quite rare you’d see a defender as one of the attacking midfielders in a 4-2-3-1 system or as one of the forwards in 4-3-3. But if you find such players, they are obviously excellent choices.

The clean sheet bonus: all defenders get it

Let’s talk about the clean sheet bonus. This is the main source of fantasy points for any defender. The CS bonus is four (4) points for Fantasy Premier League defenders, meaning it’s as valuable as a goal for an attacker.

The important thing here is that either all defenders get it or nobody will. The clean sheet is won or lost for the entire team. And now we can get to the point: a cheap centre-back gets often as many fantasy points as his expensive full-back teammate.

Let’s say you pick four full-backs with a price of 6.5M each making it a 26M purchase total. Had you chosen cheaper centre-backs, the price tag was 22M instead.

So, here is the question: which option brings you more total points? Maybe you’d be better off missing some assists here and there if you instead get a goal from Mohamed Salah in almost every match.

Let’s look at goalkeepers next. This position is the simplest one in football because there aren’t really any different roles available.

Goalies get points from three sources: clean sheet bonuses blocked shots and bonus points. There is a clear correlation between the last two. A goalkeeper gets bonus points in practice only if he kept a clean sheet and blocked many shots a well.

In modern football, there are not that many shots on target per match. This also depends on the way a shot or save is counted. In Fantasy Premier League goalkeepers get very rarely more than one point from blocked shots. Often the number is zero. A typical way in fantasy football is to give one extra point to a goalkeeper from every three blocked shots.

There is one exceptional case: a saved penalty shot. A goalkeeper gets 5 bonus points if he manages to block that. But it’s quite an irrelevant statistic, because a) penalty shots happen rarely and randomly and b) the odds are averagely only around 20-25% for the goalie to save it.

It’s no surprise that the best goalkeepers are usually the ones playing in top clubs. As explained above, the main source of points is clean sheets. Blocked shots and bonus points can never cover the clean sheet bonuses. It’s very likely that Alisson and Ederson will remain the best keepers in the 2019/2020 season as well.

But fantasy football is never that easy. You simply cannot pick the best players to each position, because you run out of budget. Hence, you need to find value from cheaper choices as well. It’s very common to do either one of these two moves:

The best goalkeepers in the medium-price range come from low-scoring teams. Even if the team would finish close to the relegation zone, their goalkeeper might be great in fantasy football. It’s all about clean sheets.

There are also some tactical moves to consider when picking the best Premier League defenders and goalkeepers. Read more of that from our FPL tactical guide.