Who are the best Fantasy Premier League forwards? How to pick attackers in fantasy football? This is not an easy question. There are plenty of potential forwards out there, who look equally good options. There are some guidelines in selecting forwards, which will help you to filter out the ultimate choices. If you follow these tips, you will definitely improve your results.

Fantasy Premier League manager needs to have a confident forward from a team playing with 4-2-3-1 or 4-3-3 formation. When finding your perfect striker, you can’t just look at the goal stats. Go deeper and check who is actually having the most shots in the team. And don’t forget to check the offsides! When buying a new striker, remember to look at the upcoming fixtures.

The biggest mistake an FPL manager can do with forwards is to select players, who are lacking confidence. You have to be courageous, fearless, upbeat and positive in order to score goals. Margins are very tight at the top level. There is no room for fearful strikers. We’ve seen even the best forwards in the world to lose their scoring boots. There’s no easy way back from a mental hole like this.

Fantasy managers tend to hold on to players like this way too long. This happens especially with the big names. It’s difficult to drop your favourite striker because he’s going to score a hattrick (in your mind) in the very next game. This might happen of course but look at the situation from the logical point of view. If the poor guy is out of form, what are his scoring chances compared to an in-form attacker?

Fantasy football is all about choices. You always have two, three, four or even more options in a certain price range. Don’t keep even Sergio Aguero your team if he’s showing signs of weakness. If you want to be a successful fantasy manager, you have to be ruthless and only go for the confident forwards.

Now you might say: “Thank you for the tip Captain Obvious, of course, you need confident players in every department!” This is not entirely true. You can read more about the subject from the article: the best defenders in the Premier League.

The defense is more like a team effort. If one defender gets a clean sheet, everyone else gets it too. Attackers are more like artists, who live or die by their individual efforts. You can trust more to numbers and probabilities with defenders, but your attackers have to also look bold and fearless on the pitch.

The best Fantasy Premier League forwards are usually the (confident) ones in a 4-2-3-1 formation. The explanation here is simple: in a 4-2-3-1 formation, there is just one target man for all deliveries. He’s the destination to all crosses and cut-backs. If a team is relieving the pressure with long balls, he’ll be once more the objective.

We have to be a bit flexible here and also count in 4-3-3/4-3-2-1 formation because they can also include one target man. The point is, that you want to have a King Striker. The one and only attacker, who is selected 100 times out of 100 when he is fit. Guys like this can score up to 30-40% of the goals of a single team if they are also the set-piece takers.

Players like Harry Kane, Sergio Aguero, Romelu Lukaku, and Jamie Vardy are classic examples of King Strikers. These guys are the number one choices, who also take penalties. The attacking flows are built around these indispensable players.

Try avoiding forwards, who play in the 4-4-2 system. The 4-3-3 is also a bit dangerous if it includes very similar players. Liverpool is a classic example of this. It’s impossible to predict to who the goals are landing in one match.

Go for the King Striker instead. Rather have the indispensable man of a weaker team than one of the many options in a good team.

Goals are mostly scored in the home matches

One thing often forgotten is the “home rule” of strikers. There are numerous examples along the course of a long season when a visiting team looks for a pragmatic small margin win on the road. Even if the quality difference between the two teams is huge.

It is more likely that a strong favorite will try to trash the underdog for the sake of putting a show for its’ home supporters. You can look at the statistics of many quality strikers and find out the number of goals scored at home vs away soil.

This might look obvious, but it’s very much overlooked. Many fantasy football managers see no difference between away and home fixtures. But if you look at the actual probabilities of the players to score goals, there are massive differences.

But how can you use this information? Think about “the home rule” when you are bringing in a new striker. The FPL fixture tracker is a great tool for this. Let’s say you’re tired of Sergio Aguero and want to trade him to Harry Kane instead. What if Harry Kane has next…

Fixtures like this should scare you out right away. Even if Kane would be in good form, this is not the best time to bring him into your team. The chances for goals are reduced dramatically in these away matches, which are also sandwiching a difficult home fixture. If Spurs would be also playing in Europe, it’d make the matters worse.

Every team has sometimes these weird runs, where they get three home fixtures inside four rounds. If you spot one of such runs, that’s the best time to bring in a new striker.

Check Out the Relevant Stats for Attackers

It’s a no-brainer that goals count for forwards. They don’t get any clean sheet bonuses and rarely assist goals either. Especially the King Strikers, who we are looking for. The common mistake is to only look at goals. Fantasy football managers tend to make FOMO (Fear Of Missing Out) choices after one or two good matches if their rivals have the player.

You need to look a little bit deeper because fantasy football is all about predicting the future. You don’t want a striker, who just scored goals last week. You need a striker, who’s going to score next week!

Of course, confidence is important. This was mentioned as the very first point in this article. But, there are usually many strikers who are scoring goals. You’d try to figure out, who’s the most likely guy to score them in the future as well.

First of all, you need to check the FPL Fixture Tracker to find out the team potential. There’s no point to pick even the hottest striker in the league if the fixtures are too bad (compared to his alternatives).

You can then check the individual stats from a site like whoscored.com. Click a team name and browse down to the page to see squad stats. Below you’ll see an image of Liverpool’s offensive stats early in the 2018/2019 season. 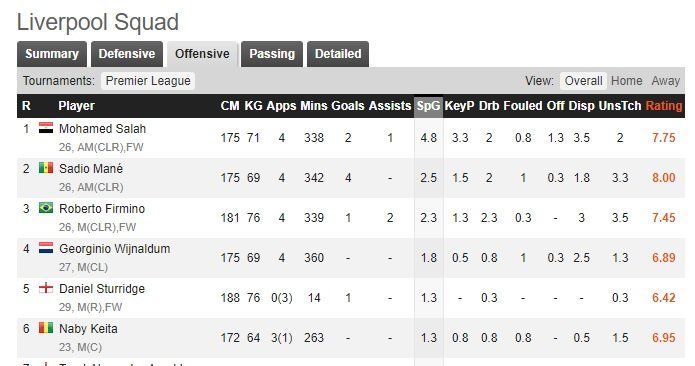 The data is sorted by SpG – Shorts per game. This is the first thing you’d look at. It’s a no-brainer that shots eventually lead to goals. As you can see, Salah has almost twice as many shots as Mane. It’s very likely that he’ll score more goals in the future matches than Mane, even if the goal stats are now favoring the latter.

Both Salah and Mane are actually midfielders in the Fantasy Premier League forwards, but the point remains the same. Most often you are comparing attackers between two different teams.

KeyP means key passes per match. If you are in-between two similar options, choose the one with more key passes. These will open scoring chances for his teammates eventually, which will lead to assists and extra (bonus) points.

One other column you want to check is Off, meaning offsides. This might not be so obvious at first, but it’s very important. The player getting into offsides is the target of through-balls. This is often the case late in the match when his team is more defensive and using counter-attacks. These through-balls will eventually lead to 1-on-1 situations and many goals.

Last but not least: don’t forget the European competitions. Europa League is in fact much worse than Champions League because you have one day less to recover from it. This might not sound a big deal, but it is.

The teams playing in the Champions League are often very used to it. If you are going to pick one of the top strikers in the league, there is a slim chance that you can avoid European games. However, if there are top club forwards not playing in Euro cups, you’d definitely go for such players. Premier League teams are typically using their B-squads in Europa League. In that case, the top striker gets usually a pass. He might be much fresher than his Champions League counterpart.

Euro cups and usually a concern for weaker teams, who don’t feature there normally. Burnley was a good example in the 2018/2019 season. The Europa League qualifiers seemed to mess up the concentration of the team in the Premier League fixtures. You have plenty of options in fantasy football. Filter out clubs like this.

Want to read more beginner’s tips to the Fantasy Premier League forwards? Go back to the FPL guide! Check the official FPL scoring rules from here.