The Sun Dream Team is a popular fantasy football game in the UK. Lots of Premier League fans are competing of a £100,000 prize pool each season. If you are not familiar with The Sun Fantasy Football yet, you have come to the right place! We’ll give some useful tips and introduce all the key features and rules.

The Sun Dream Team is a Premier League Fantasy Football game. Each person will manage a squad of players picked from real Premier League teams. If your selections score goals and keep clean sheets, you’ll score a lot of points.

The game is hosted by The Sun, which is one of the biggest newspapers in the UK. The game is for UK people only and you’ll need a valid UK phone number to complete the registration form.

The concept similar to FPL or any other Fantasy Premier League game: you have to build a squad inside a given budget and see how your players will perform. We’ll go through the differences of these formats later in this article.

There are also some rules that differ from the official Fantasy Premier League game.

Let’s start by creating a new team to The Sun Dream Team Classic version. This is the traditional fantasy game, where you’ll manage a team throughout the whole season.

Creating a new team is easy if you have ever played any fantasy games before. The view looks similar to FPL as well. 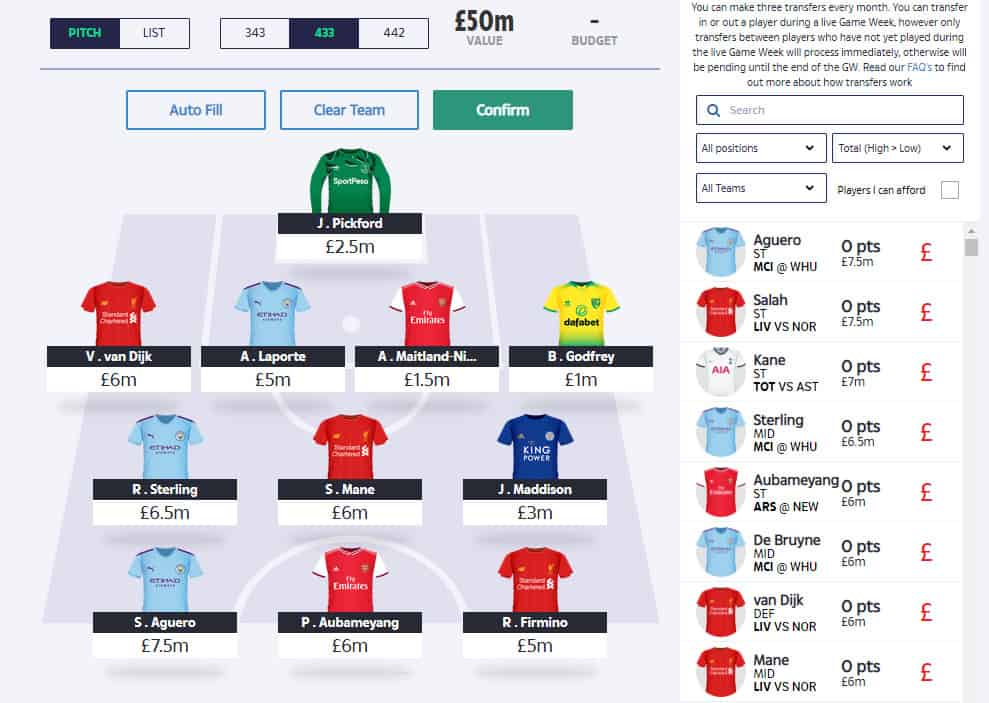 There are some weighting differences, though. Virgil Van Dijk 6M compared to the most expensive midfielder, who is Raheem Sterling with a 6.5M price tag. On the other hand, the cheapest defenders are really cheap (down to 1M).

All you need to do is find players using the list right next to the formation. You can filter and sort players by name, price and fantasy points they have achieved so far.

You can create several entries to the classic game but no more than ten (10). Please review game rules before playing, because they might have changed after this article is written.

TSDT has some special rules you must be familiar with before playing. It might look like the official Fantasy Premier League game, but there are quite a few surprises.

First, there are no special chips or wild cards available. You are given three transfers for each transfer period, which means in practice a month. The exact dates vary a bit depending on the fixtures.

This means there are fewer transfers available compared to FPL, where you have one per week plus the possibility to create more transfers against negative points. You must plan your team very carefully or you’ll end up in big problems.

It’s important to know that each game week starts on Friday at 07:00:00 and ends at 06:59:59 on the following Friday. You cannot leave your team selection to Saturday mornings, which is often the case in other fantasy games. You can use three transfers at any time you want during the transfer period.

There is one bonus feature as well: the transfer takes an immediate effect if both teams involved are yet to play. Hence, you can make a player swap in the middle of the game week at Saturday evening between two teams featuring on Sunday.

If you have unused transfers after a transfer period they won’t be added to the next period.

Let’s check out the scoring rules of The Sun Dream Team Fantasy Football. They are quite close to FPL, but there are a few significant differences.

The official scoring rules are as follows:

Goalkeepers
Penalty Save or Miss +3 pts

Embed from Getty Images
First, all players get 5 points from scoring a goal. In FPL, the goals are more valuable for a midfielder and defender. There is also an additional hattrick bonus of 5 points.

TSDT doesn’t have a bonus point system like FPL, but they use WhoScored.com ratings to reward players from good performances. These extra points will pretty much land to same players who’d get bonus points in FPL.

Defenders and goalkeepers get one extra point from a clean sheet compared to FPL. The penalty save gives only +3 points in TSDT compared to +5 used in FPL.

All in all, the scoring system is similar enough to FPL that it doesn’t require any extensive learning. You can use pretty much the same principles in team building in both games.

There are nice cash prizes available in TSDT. The classic season game has a £100,00 prize pool, which is given to the top five managers.

There is also a prize pool of £50,000 in the Weekend game format. Let’s look at that next.

Dream Team Weekender is close to daily fantasy format. The idea is quite simple: you can create a new team for each weekend. There is also one other major difference: you’ll select seven players without a budget: GK, DF, DF, MF, MF, FW, FW.

Dream Team Draft is a new format introduced by The Sun. The idea comes from the FPL draft and it means just what the name suggests. Team selection is done by drafting players one-by-one. There is no budget, but each player can be drafted only to one team. You have to join a league in order to play against one or multiple opponents.

Even if there are some differences between TSDT and the official Fantasy Premier League game, you can still use your FPL knowledge here.

The basic strategy is no different: you must look at the fixtures and create your team based on the schedule they have ahead, not just based on the next match. There is a good FPL Strategy Tips article on this website you should check out.

Our FPL Fixture Tracker is a powerful tool to use in The Sun Fantasy Football as well. Learn how it works and find players from teams with favourable fixtures ahead.

Remember, that there are fewer transfers available in TSDT. And not just that, but there is no reset button either. Many FPL managers use the autumn wild card after 4-5 rounds already. It’s easy to make mistakes based on the pre-season games and select players you think will be regulars.

There is no such feature in The Sun Dream team. You can overcome this a bit by creating different teams and rotating some player selections.

It’s recommended to save your transfers until it’s absolutely necessary to use them, for example, there is a long injury or a suspension of several matches.

If you want to turn your fantasy football knowledge into cash, it’s possible! There are tens of thousands of euros in daily fantasy prize pools every week. We have reviewed the best European daily fantasy providers. Check out the list below and claim some fantastic deposit bonuses!