ntZweeler is one of the most interesting daily fantasy platforms in the European market. The website offers a wide range of sports and different game formats. This article is a Zweeler review. We’ll go through the essential features of the website, teach the basic rules and give our recommendations as well.

Zweeler has a long history in the daily fantasy genre

Zweeler.com has offered fantasy games for quite a while. The site is run by Zweeler Limited and it’s been licensed by the MGA (Malta Gaming Authority) since 2010. Zweeler has been also granted a UK gaming license earlier this year.

The Zweeler team has built a strong follower base over the years. Nowadays there are over 25.000 players registered to the site! There’s also a Zweeler forum for announcements and other discussion, which has more than 1.500 topics and 34.000 messages.

In short, it means playing fantasy football for real cash. The difference to the betting world is that you play against other users, not the house. Zweeler is the game host, who runs the platform and creates the tournaments.

The word daily refers to the length of tournaments, which can be anything from one weekend to one single match. The season game format is also there, but these are special one-time tournaments.

There are no monthly fees and the registration is free of charge as well.

Once you enter the site, click the big green button titled Register now. A form opens, where you can fill in your personal details. You’ll receive an activation e-mail after finalising the registration. Click the link in the e-mail and you’re done!

After logging in, you’re directed to the tournament lobby. The concept is familiar for anyone, who has played online poker before. The lobby has a list of available tournaments, and each one has a different buy-in, prize pool and rules. 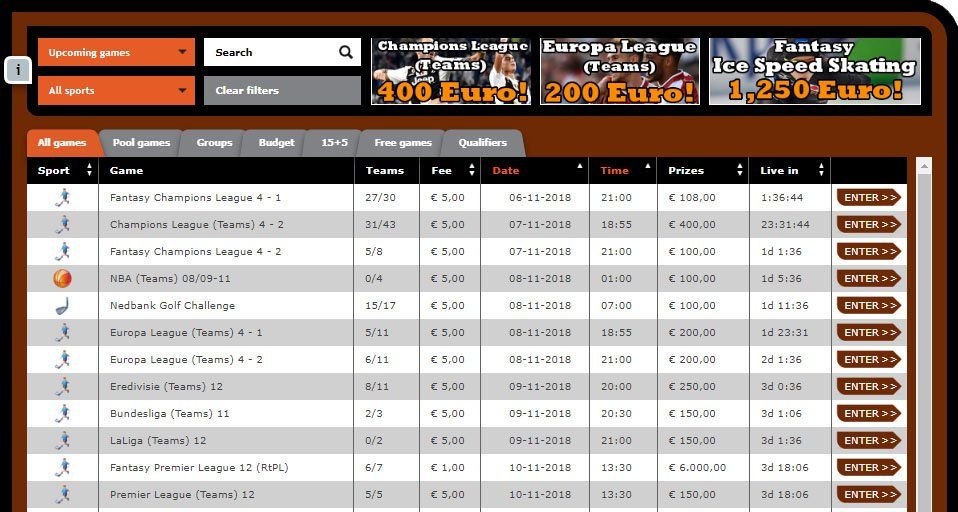 You can filter the list by sport and game type. It’s also possible to search for tournaments by a name. You can sort the tournament list by each column as well (Sport, Game, Teams, Fee, Date, Time, Prizes, Live in).

Zweeler lobby looks quite a bit different for those, who have played Fantasybet or Fanteam before. The biggest difference is the wide range of sports and available game types. Zweeler offers some interesting sports such as ice skating, formula one, MMA, snooker, darts, biathlon and many, many more.

Game rules are also very different between each sport. The budget and team sizes differ also in football between tournaments.

If you want to play for money at Zweeler, you must make a deposit. Click My account from the top menu to view your current balance. There’s also a big deposit link in the menu bar.

Zweeler offers a 100% first deposit bonus up to 250€. This is a fantastic offer, but it’s available only once. Think carefully before making your first deposit, so you can claim the maximum amount of free money.

Minimum deposit is 10€, but deposits below 25€ are not eligible for the 100% deposit bonus. You don’t have to use a bonus code to get the bonus money. 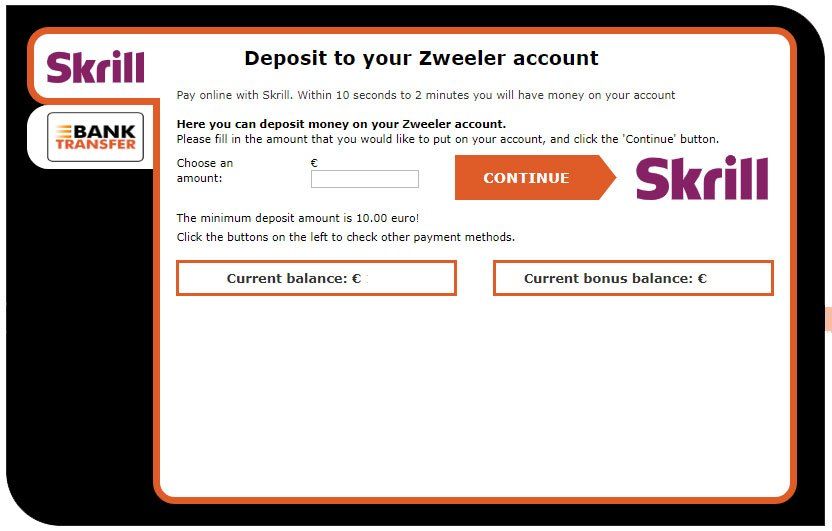 Zweeler supports bank transfer and Skrill for deposits and withdrawals. It’s recommended to use Skrill, if possible. With Skrill you can deposit in real time (10 secs to 2 mins). Withdrawals to Skrill are processed in 1-2 working days.

How to play and win money at Zweeler

Now it’s time to start to make some money! Click Lobby from the main menu to open the tournament list.

Filter tournaments and find the ones you like. When you click a tournament name in the lobby, an info page opens. Read the game rules carefully before entering and check the prize pool structure. 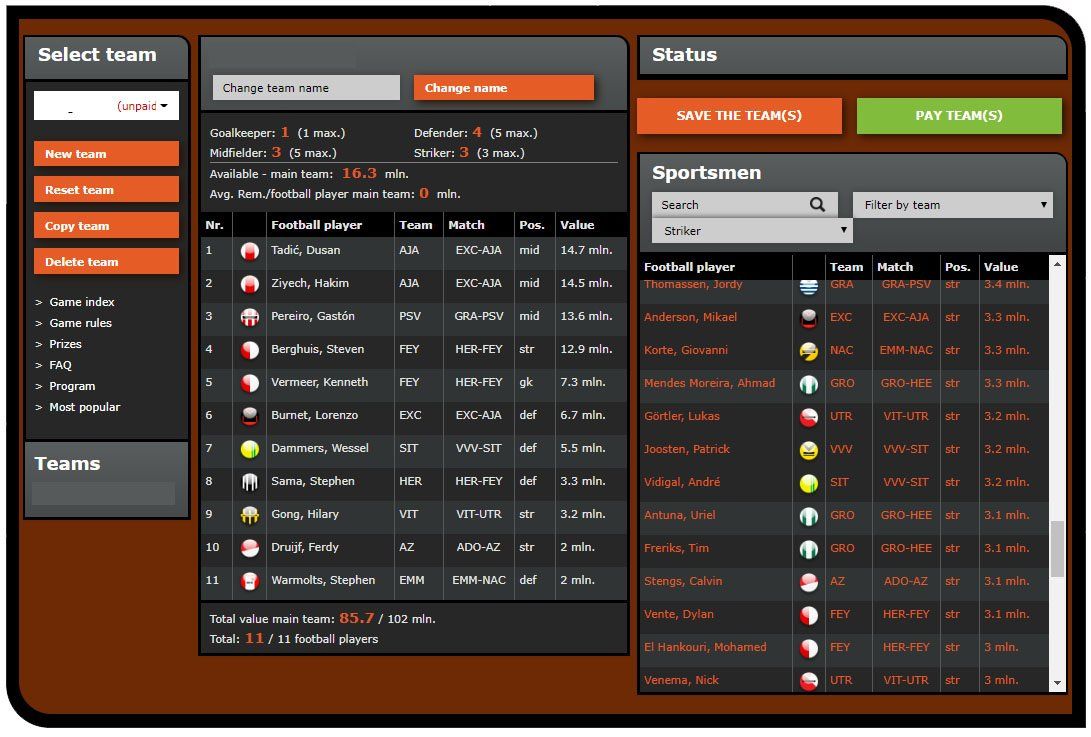 Zweeler’s approach to team creation is a simple list of participants. They offer so many different sports, it’d be difficult to have a graphical interface for each of them.

You can filter the player list by position, club and value. It’s also possible to search for a player.

There’s no captain or vice-captain selection at Zweeler, which is usually the case with other fantasy football sites. Many fantasy managers like this, because captain selection brings always an extra luck element to the game.

If you are inexperienced in fantasy football, check the following articles for tips. They are written for Fantasy Premier League (FPL), but the ideas can be used for Zweeler as well.

Zweeler uses fixed player prices in football. This means that players prices don’t change dynamically depending on the fixture difficulty.

Fixed prices give opportunities for smart managers. This is where our unique fantasy football fixture tracker comes along. Even if it’s designed for FPL, you can use it for Zweeler as well. Use the fixture tracker to see the scoring potential of each team. That will help you to find over-priced and under-priced players from the system.

Zweeler’s football scoring system is quite similar to FPL, making it easy for newcomers to adopt. There are some differences, though.

This means that Zweeler gives higher attacking rewards for defenders compared to FPL. Goalkeepers get a bigger clean sheet bonus too, but they do not get any rewards from blocked shots.

Zweeler has so many different sports and game types that it’s impossible to cover them all here. The scoring rules for ice skating, formula 1 etc. are obviously totally different.

If you like football, there’s also an interesting game format called Teams. Your task is to choose teams form a fixture list instead of players. Teams will get points based on the match statistics: ball possession, goal attempts, corners, goalkeeper saves and of course the match result counts.

Zweeler is the oldest daily fantasy provider in the European market. The site offers an unrivalled range of sports from ice skating to formula one. Zweeler has built a strong user base over the years, and there’re over 25.000 people registered already.

There is also an active discussion forum, where Zweeler team reports of the site’s developments. You can read the forum easily through Chrome’s Google Translate function, even if you don’t know the Dutch language.

The major flaw of the site is its design. Zweeler looks quite different compared to modern websites. The word responsive is unfortunately not part of the design. The interface is not only old-fashioned but also a bit difficult to navigate. Hopefully Zweeler would upgrade their website to meet the current responsive design standards.

The customer service works fast and communications with Zweeler have been pleasant.

Even if the site is not up to modern design standards, the wide range of sports combined with the deposit bonus makes Zweeler worth a try. There’s also another bonus for newcomers: refer a friend and you’ll get 15 euro bonus!

There are quite a few differences between Zweeler and other European DFS providers. In fact, Zweeler is so different, that I wouldn’t place Zweeler as a direct competitor for either Fanteam or Fantasybet.

We’ve mentioned the biggest difference few times already: the amount of sports. Zweeler offers currently fantasy games to 21 different sports, which includes pretty much any major sport in the world. Fantasybet has only football and Fanteam has football, ice-hockey, basketball and golf.

The weakness of Zweeler is the size of the prize pools. Fanteam and Fantasybet both run a 100.000€ season game and 10.000-20.000€ weekly Premier League tournaments. Zweeler daily/weekly prize pools are typically in a range of 100 to 1000€. Daily fantasy tournaments are with 2,5€-7€ participation fees and designed for 20-50 participants.

Zweeler is a better option for a recreational player, who loves to follow many different sports. The prize pools are quite nice in many tournaments, because Zweeler doesn’t charge any rake and they often hand out more money than participation fees add up to.

If you want to play professionally with higher stakes and compete for big prize pools, Zweeler is not for you. This makes Zweeler also easier for newcomers, because more high-staking whales are probably elsewhere. Even if Fanteam or Fantasybet have much higher weekly prize pools, it’s almost impossible for a newcomer to win them.

Zweele’s outdated design is handicap for mobile users. If you like to use only portable devices, Fanteam is the best option.

>>> register at Zweeler and claim your bonus!

Fantasybet is one of the most popular European daily fantasy platforms. It’s a great choice for daily football enthusiasts, who want to play fantasy football for money. This article is a Fantasybet review. We’ll introduce […]

PlayON is a UK-based daily fantasy provider. The platform has a strong focus on English audience by offering rugby and cricket fantasy games. This article is a PlayON fantasy review. We’ll go through the essential […]